by Aarti Nagraj and Mary Sophia 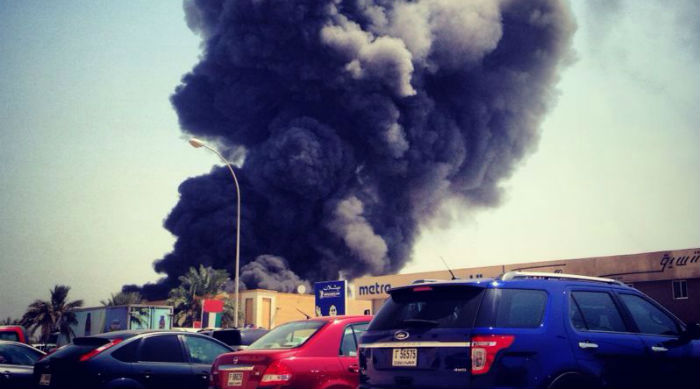 A massive fire broke out in a garment factory in Dubai’s Al Quoz 3 area, Dubai Civil Defence Ministry officials confirmed. No casualties or injuries have been reported so far.

Policemen on the ground said that the building, occupied by Sana Fashion, caught fire between 10 and 11am. The blaze spread quickly since it was a garment factory, they added. [Click here for pictures of the fire]

The fire was reported at 11.19am, a civil defence spokesperson said. Authorities are taking samples from the site to investigate the cause for the blaze and declined to comment on what might have caused the accident.

However, eye-witnesses say that the accident was most likely caused by an electric short circuit.

“It was sudden and we all came running as soon as the fire began,” said a worker from a nearby factory. “It took a while for the fire brigade to come since it was rush hour here in Al Quoz,” he said.

The garment factory is situated right next to the Modern Bakery in Al Quoz. Buildings surrounding the factory seemed to be unaffected.

In an attempt to stem the fire quickly, the police cordoned off the roads leading to the factory.

Plumes of smoke were seen billowing across the emirate and Dubai residents took to Twitter to post pictures and comments about the blaze.

Dubai has witnessed several fire accidents in recent months, including an inferno in Jumeirah lake Towers late last year which gutted the building.