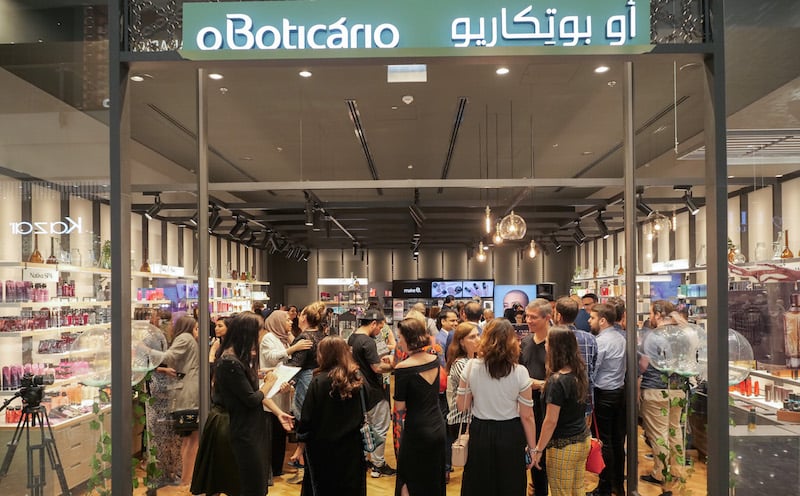 The largest fragrance player in Brazil, the brand has over than 4,000 stores worldwide, including over 3,700 in its home country.

The company, which was founded in 1977 by a pharmacist, currently has a product line of approximately 1,200 items made with exotic ingredients, such as quinoa grains and lily extracts.

But the Dubai store will have the 480 best sellers in body care, facial care, makeup, fragrances, deodorants, soaps and shampoos, a statement said.

Products, priced at roughly Dhs200 to Dhs250, will cater to the “masstige” market – between the premium and mass market, according to André Farber, vice president of Business and Franchises at O Boticário.

“We are launching in Dubai because of the opportunity in the region,” he said.

The brand has partnered with Dubai-based investment management firm Millennial Capital to expand in the Gulf region.

The Dubai store – based on its Amphora model- features sustainable elements – it will generate less waste; launch ecobags created from recycled material; and include modular furniture requiring less construction work. The store is also designed with less acrylic and optimises the need for steel, aluminium and MDF sheets.

“We believe in the standalone store concept – that’s the way we operate in Brazil and that’s our initial plan for this region,” said Farber.

A second store in Dubai Mall is expected to be launched by the end of this year, with plans for opening in stores targeting the departmental stores and pharmacies, and expansion into Saudi Arabia in Q4 2019.

The company is also simultaneously launching its e-commerce platform – initially just for delivery in the UAE, but with plans to expand it to the GCC region.

“We are investing heavily in the region,” confirmed Farber, although no financial details were disclosed.

All the products in the Dubai store will be exported from Brazil directly, he added.

While admitting that Dubai and the UAE is a competitive market, he expects O Boticário’s unique offering to help it stand out from competition.

According to a recent report by Euromonitor International, the retail value of the Middle East and Africa region’s beauty and personal care market is estimated to be worth $35.9bn in 2018. It is also anticipated to continue growing at a compound annual growth rate of nearly 10 per cent over the next four years.

The report also found strong growth in the UAE, with consumers spending an average of $247 per capita on cosmetics and personal care – more than any other country in the Middle East and ninth worldwide. That amount is predicted to reach $294 in 2020, according to Euromonitor.