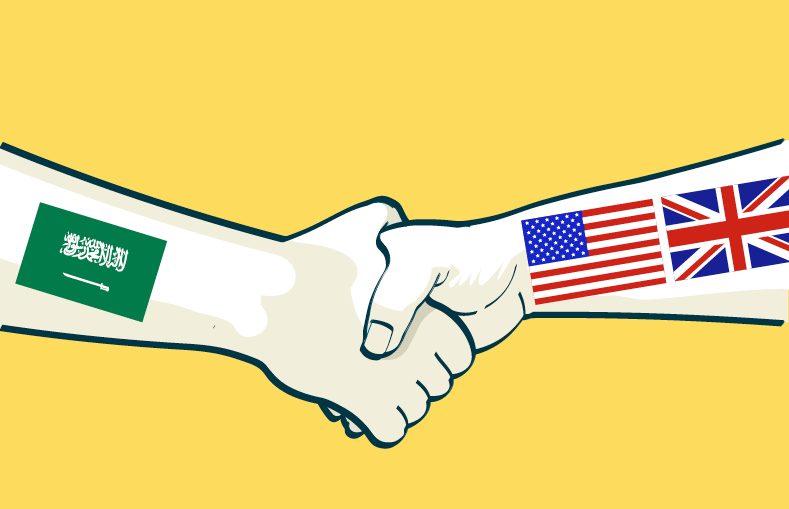 Frequently analysed in the media and often a focal point for discussion, the relationship between Saudi Arabia and the United States has historically been a strong, though not necessarily straightforward one.

But periodic bumps aside – especially when economic and political interests have diverged – Riyadh and Washington have long cooperated closely in numerous ways, perhaps most overtly in the military sphere. Most recently this has been in the fields of intelligence gathering and counterterrorism, chiefly in response to the growing impact of global terrorism.

While the kingdom has maintained its status as a major trading partner with Washington, the dynamics of that relationship have changed in recent years – in part reflecting the recent slump in oil prices.

Despite Saudi Arabia’s precipitous decline in exports to the US, it’s a price Riyadh has seemingly been prepared to pay as it continues to lead OPEC in flooding the market with oil to undermine the US shale industry.

Yet while Riyadh’s pockets are deep, they are not limitless. Especially as reserve assets held in foreign securities fell by a record $108bn in 2015, according to the Saudi Arabian Monetary Agency. Indeed, attempting to take out a substantial portion of the US shale industry may prove counterproductive in the long term given growing budgetary pressures at home. The kingdom’s deficit hit a record $98bn in 2015, according to the Council of Economic and Development Affairs.

Moreover, Riyadh also runs the risk of incurring domestic political disquiet as it seeks to plug its funding gap. It has sanctioned huge rises in the price of gasoline, electricity and water, as well as a pledge to introduce value added tax from 2018, together with tariffs on sugary drinks and tobacco.

Meanwhile, US hedge funds have significant war chests of their own with $50bn reportedly waiting to snap up any distressed US shale assets – including infrastructure – as and when they become available. These assets can be mothballed and then sold on at a profit when oil prices make significant improvements.

In this war of attrition, the numbers tell their own story. Data released by oil services giant Baker Hughes in September showed the number of rigs actively operated by US drillers rising (to 414) for the 10th week out of the previous 11 – the longest such stretch of additions since 2011. It also sharply contrasted with the first half of 2016, which had seen a net decline of 206 rigs and the recent low of 316 reported in May 2016.

Adding to Riyadh’s woes, the latest data from the International Energy Agency now expects the global crude oil market to be oversupplied at least throughout the first half of 2017 – a significant revision on its previous forecast of global surpluses disappearing in the second half of this year. Across the Organisation for Economic Co-operation and Development, inventories have risen to a record 3.11bn barrels, the IEA added.

Unsurprisingly, the changing political dynamics of the Middle East, including the pursuit by Riyadh of a more aggressive foreign policy has underscored the need to bolster military expenditure. This move is typified by intervention in Yemen and the need to head off potential terrorist threats at home.

Military security considerations have trumped political tensions on the energy front. Since assuming office in January 2009, President Barack Obama has offered the Kingdom more than $115bn in weapons, other military equipment and training for the Saudi security forces, according to a recent report authored by William Hartung of the US-based Centre for International Policy.

Intervention in Yemen has boosted arms trade between the nations, including a tank deal worth an estimated $1.15bn, $500m in ammunition to the Saudi Land Forces and a pledge of $1.29bn worth of bombs and air-to-ground missiles to the Royal Saudi Air Force, according to Hartung.

Despite the Obama administration adopting a more cautious military posture than its predecessors when it comes to direct involvement in the Middle East, it has sanctioned more arm sales to the Saudis than any other US administration in the history of the country’s relations.

Yemen-centred deals aside, the administration has since September 2014 alone notified Congress of proposed military sales to Saudi Arabia totalling a potential $21bn.

Not all offers will necessarily come to fruition, with misgivings from Congress underscoring this point.

The British government, meanwhile, sanctioned GBP3.3bn ($4.46bn) in arms exports to Saudi Arabia during the first year of the Yemen intervention (April 2015 – March 2016). This included exports of GBP2.2bn ($2.97bn) worth of equipment comprising drones, helicopters, and other aircraft.

Like the US, the UK has a strong historic relationship with Saudi Arabia – the kingdom being London’s largest trading partner in the Middle East.

London exported around GBP7bn ($9.44bn) of goods and services in 2014, of which goods accounted for GBP4.17bn ($5.63bn). More than 6,000 UK firms now actively export goods to Saudi Arabia – the top exports in 2014 being transport related equipment, power generating machinery and equipment, medicinal and pharmaceutical products, general industrial machinery and consumables.

The UK is also the kingdom’s second largest cumulative investor with approximately 200 joint ventures, estimated to be worth around $15.4bn.
Underpinning the long-term narrative running through both US and UK relations with Saudi is Riyadh’s desire to reduce its economic dependency on fossil fuels.

Key to this is Saudi Vision 2030 and its derivative the National Transformation Program, which seeks among other things to ensure 40 per cent of public spending is financed by the private sector, increase non-oil revenue from $43.59bn to $141.3bn, create 450,000 jobs and launch 29 digital initiatives in ‘vital sectors’.

To spur this transition, which may also include a stake sale of up to 5 per cent in state-owned Saudi Aramco, US development expertise and financing is likely to be at the front of the queue.

Company officials have already said the kingdom has discovered a total of 805.6bn barrels of oil, of which – exempting that already extracted – includes 260bn proven and a further 403bn of reserves it could probably extract.

Factor in a potential 100bn barrels in additional reserves as technology improves and clearly any Saudi Aramco stake sale will likely prove a much needed cash cow for Riyadh.

Yet irrespective of how efficient the US proves to be in exploiting the economic opportunities laid out in Vision 2030, deepening ties can already be seen. One example is the $20bn Sadara joint venture between Dow Chemical Company and Saudi Aramco.

Five years on from its establishment, the complex recently confirmed the start-up of a mixed feed cracker – the only one of its type in the Middle East and set to be one of 26 manufacturing units that will form part of the Sadara chemical facility.

Crucially, investment isn’t one way. Exxon Mobil Corp. announced in July that is is considering a major new petrochemical complex on the US Gulf Coast in a joint venture with Saudi Basic Industries Corp. While no costings have been detailed yet, it underscores ongoing US-Saudi co-operation in the private enterprise sphere.

Yet even where cooperation falters – as in the case of Royal Dutch Shell and Saudi Aramco’s Motiva Enterprises joint venture – it can lead to further economic opportunities.

The plant, which can process 600,000 barrels of oil a day offers strategic value for the Saudis, given they would then be able to bring more of their crude into the US for sale in the North American market.

Against this backdrop, April 2016 data from the American Chemistry Council showed US chemical industry investment linked to natural gas and natural gas liquids (NGLs) from shale hitting a total of $16bm.

It added that 40 per cent of the investment for the 264 projects, new facilities, expansions and factory re-starts is completed or underway, while 55 percent is still in the planning phase. Despite Saudi misgivings posed by the threat from US shale, longer-term investments make strategic sense for Riyadh.

Smaller scale, though no less important, the May 2016 Memorandum of Understanding signed by GE and Saudi Arabian Industrial Investments Company (SAIIC) will see co-investment in strategic sectors aimed at helping develop and localise industrial value chains in the kingdom to serve the domestic market and beyond.

Joint investments of $1bn – aimed at complementing the kingdom’s Saudi Vision 2030 and designed to build industrial know-how – will be rolled out by 2017, in addition to an aggregate potential investment of $2bn to drive projects in water, energy, aviation and other sectors.

While UK-Saudi relations are predicated on a ‘more or less equal’ basis – invariably running as they do in parallel with Washington’s dealings with Riyadh – the occasionally rocky nature of the latter is more symptomatic of the standard strong state-weaker state relationship. The weaker state, in this case Saudi Arabia, is continually revising its level of engagement with its much stronger partner.

Riyadh has long complained about Washington not doing more to unseat Bashar al-Assad in Syria and has reacted nervously to growing US engagement with regional rival Iran and a more stable Shia-controlled Iraq. Sunni Saudi Arabia sees the possibility of further sectarianism across the region running counter to its strategic interests.

Economic self-interest will invariably trump all, however, and while Riyadh may question whether Washington is taking on board all of the kingdom’s regional concerns, the likely outcome of ‘business as usual’ in the economic sphere will ensure ties remain strong.

A measure of the two-way relationship between Washington and Riyadh could be seen in March 2016 when four decades of secrecy was swept away after the US Treasury Department – following a Freedom of Information Act request from Bloomberg – revealed the Saudi Government had accumulated $116.8bn of US Treasuries.

Though substantially less than the $1.3 trillion and $1.1 trillion held by China and Japan respectively, it confirmed the level of investment engagement between Riyadh and Washington is substantial.

It may also be an understated figure, given the governments and central banks invariably invest in debt through custodial accounts.

What’s clear, given the kingdom’s central bank listed $587bn of foreign reserves at the time, is that a sizeable chunk of this is likely to be in US Treasuries. Hence the apparent gap in numbers may be significantly less.

While US-Saudi relations will never be based on shared cultural or historical values, so long as the kingdom’s conservative theocracy remains in place, they will endure – and most likely strengthen – on the back of each other’s business interests.