Book Review: Breakout Nations (In Pursuit Of The Next Economic Miracles) - Gulf Business 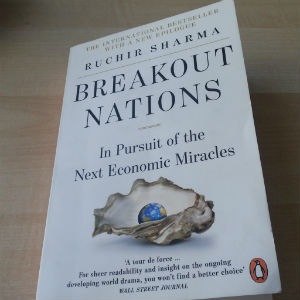 Ruchir Sharma’s accessible writing and engaging content in ‘Breakout Nations’ explains why it’s riding high on the best-seller lists. Sharma, a writer and Morgan Stanley investor, draws on 20 years touring the developing and developed worlds, and provides unconventional insights on both.

Investors, business travellers and government officials will find much to enjoy in this book – as well as the ordinary man or woman on the street, given the way post-2008 has impacted all our lives.

He debunks BRIC and other lazy acronyms, stressing developing economies are now too large to be lumped into one marginal class – but does make some interesting connections I hadn’t heard before (Indian expats, in particular, may find the ‘inauspicious’ Indo-Brazilian one insightful).

The chapter on ‘China’s after party’ incorporates historical perspective and current ‘bulls-and-bears’ forecasts, and makes measured analysis here as elsewhere – notably, that the China slowdown won’t devastate China, or the rest of us. “If China moves to 6-7 per cent growth in the coming years, it will first feel like a mild recession . . . but it will hardly be a cataclysmic event for the global economy”.

Commodity-export countries come in for different analysis, the challenges facing Brazil and Russia reading in contrast to Indonesia, “a commodity economy that works”.

In all, he lists the Philippines, Indonesia, Thailand, Turkey, Poland, Czech Republic, South Korea, Nigeria and Sri Lanka as countries to watch. In the case of Poland and Czech Republic, he says strong institutions and absence of excessive debt provide a favourable platform while the ‘gold medallist’ is South Korea.

The Asian country invests heavily in R&D, is fuelled by a red-hot technological sector (LG, Hyundai and Samsung now account for 21% of the country’s GDP) and happens to be one of the first countries to report economic data where the numbers are “fast, accurate and reliable”.

With all the focus east, and government shut-down in the US, it’s always tempting to overlook the prospects of the world’s largest economy, but Sharma says despite its large debt, the omens are favourable for the States, with its growing energy sector, manufacturing revival and technological expertise.

In the Middle East, he outlines Turkey’s potential, but admits to being stumped by the dynamics of Gulf economies. “Why Gulf markets are out of sync with economic growth is just one more puzzle in a region I’ve increasingly come to see as a world unto itself.”

He describes how local glass companies, despite being surrounded by sand, have to import their main ingredient. This is no fault of Gulf nations, he writes, but simply a sign of how difficult it is to build a modern society with a diverse economic base in an inhospitable desert.

“The Gulf States are thus an extreme example of why no two emerging or frontier nations can be treated alike. The Gulf is proof positive that every emerging nation – particularly in the Fourth World – is unique.”