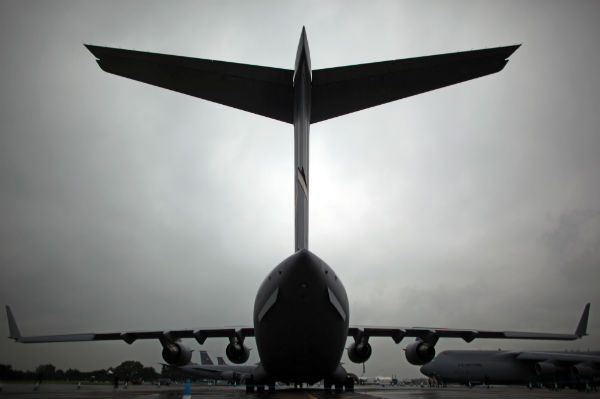 Boeing expects to double revenue from its defence and security business in the Middle East over the next two years as recent turmoil in the region drives up demand for arms.

The U.S. planemaker, which also makes fighter jets, helicopters and anti-missile technology, expects to increase its annual revenue from defence in the region to about $4 billion over the next two years.

That would be part of a wider plan to lessen reliance on U.S. government work, which is being squeezed by spending cuts.

Boeing’s fighter jets as well as the U.S. company’s C-17 military transport aircraft have been in strong demand. Last year, Boeing signed a $29.4 billion deal to sell 84 F-15 fighter jets to Saudi Arabia, as well as a big defence sale to UAE.

“A lot of customers are shopping for the F-15 and F-18 Super Hornets and as we introduce more C-17s into the market, we will continue to see interest in that strategic area too,” Johnson said.

The Middle East accounts for a third of Boeing’s international defence business, Johnson said. This equates to an annual revenue of about $2 billion.

Asked if demand in the region would result in a doubling of this figure, Johnson said: “Yes, over the next couple of years. There is so much interest over a wide range of products.”

Revenue for Boeing’s defence business was about $31 billion last year and is expected to be about the same in 2012, with about 18 percent from its international clients, Johnson said.

“It’s a very competitive market. When we see the flattening of defence budgets in Europe and U.S, emerging markets become more important and clearly Middle East is up there.”

Johnson said high oil prices coupled with threats to the region were going to allow Gulf armed forces to upgrade their military resources.

The United Arab Emirates (UAE) had been expected to finalise a $10 billion deal with Dassault to buy 60 of the French group’s Rafale jets, but talks faltered as the UAE said the terms were uncompetitive.

Others have also been trying to sell their wares. British Prime Minister David Cameron visited the UAE earlier this month, hoping to get it to consider the BAE Systems-built Eurofighter Typhoon fighter jet.

Boeing is not in active talks with the UAE on this deal.

“We have offered our platforms. If one of those fits the bill, we will certainly talk to the customer. But we are not in any kind of active discussions,” Johnson said.

Boeing has offered its fighter jets to other Gulf states including Kuwait, Qatar and Saudi Arabia. Egypt has also been a top customer for Boeing in defence and commercial planes, and it has strong trade relations with Jordan and Iraq.

Johnson dismissed concerns that airlines may opt for rival Airbus’ A350-1000 passenger jet if the new version of Boeing’s popular 777 plane is delayed.

“We will have several variants and improvements for the 777 in place before the A350-1000 even hits the market,” he said.

Boeing has not yet offered the new version of the 777, provisionally called the 777X, though carriers such as Emirates and British Airways have been planning for it to enter service by the end of this decade.

Boeing appears at least a year away from offering a new version of the 777, Reuters reported this week.

“I think you’ll see it in the near term. I don’t know if near term is tomorrow, next year or two years. But we are going to stay very close to our customers.”

“Our strategy is to stay close, see what they need and we will roll that out,” Johnson said.

Tim Clark, President of Emirates, the largest customer of the 777, said in November it would consider replacing its planned fleet of 175 Boeing 777s with the 777X.

“There is demand for the 777X, but what this really comes down to is the trade-off,” he said, suggesting discussion are on the changes that are being asked for by the customers and what the planemaker can offer.

He added that Qatar Airways and Abu Dhabi’s Etihad Airways will have a big role in the decision on the new stretched version of the Dreamliner, the 787-10.