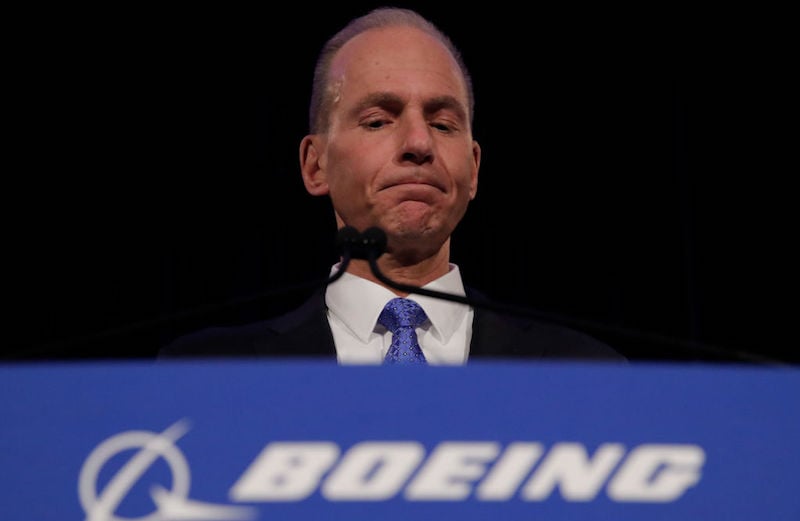 Dennis Muilenburg was ousted as chief executive officer of Boeing Co., a once-unthinkable turning point for a U.S. industrial champion now engulfed in turmoil after two deadly crashes of its top-selling 737 Max jetliner.

David Calhoun, a General Electric Co. veteran who had served as chairman since October, will replace Muilenburg as CEO and president Jan. 13, Boeing said in a statement Monday. The move followed a rare public rebuke earlier this month by the U.S. Federal Aviation Administration. Just last week, Boeing said it would temporarily halt output of the Max, which has been grounded since March.

Boeing’s directors voted unanimously to install Calhoun, 62, as CEO during an emergency session Sunday, said a person close to the board. Chief Financial Officer Greg Smith will serve as interim CEO during the brief transition period, the company said. Director Larry Kellner, who once led Continental Airlines, will replace Calhoun as chairman.

Boeing is trying to regain its footing amid the Max grounding, one of the worst crises of the modern jet era. The planemaker’s reputation and finances have been battered after the Max disasters killed 346 people and prompted the worldwide grounding. Boeing’s design decisions and cozy relationship with the FAA are being scrutinized by Congress while the Justice Department is conducting a criminal probe.

“A change in leadership was necessary to restore confidence in the company moving forward as it works to repair relationships with regulators, customers, and all other stakeholders,” Boeing’s board said.

Calhoun, a senior executive at Blackstone Group Inc., now faces the daunting task of extricating Boeing from one of the bleakest chapters in its 103-year history.

Boeing is turning to a GE veteran to run the company for the third time in less than two decades, as the U.S. planemaker faces scrutiny for its unrelenting focus on shareholder value. The two CEOs who preceded Muilenburg — Jim McNerney and Harry Stonecipher — also rose through the ranks at GE while Jack Welch was chief executive.

Calhoun had been in the running to head Boeing almost 15 years ago, when directors instead selected McNerney. Calhoun ran GE’s aircraft engines division from 2000 through 2004 and ascended to the vice chairman role before leaving the company in 2006.

He will serve as a “stabilizer” as Boeing works itself out of the Max crisis, said Richard Aboulafia, aerospace analyst with Teal Group.

“There’s no doubt with Congress and regulators this is a lot better, and in the short run that matters a lot,” Aboulafia said.But in the longer term, Boeing faces daunting product-development decisions — starting with whether or when to replace the 737 Max — that will be difficult for a company outsider with no engineering background, Aboulafia said.

“As long-term leader, GE plus private equity would appear to be not the right background given their needs right now,” he said of Calhoun.

A knock on Muilenburg, an aerospace engineer who spent his entire career at Boeing, was his lack of experience running commercial aircraft programs. The former Boeing CEO ascended through the defense division.

If his departure is classified as a retirement, Muilenburg’s exit package would be worth about $37m at today’s approximate share price of $336 and assuming target performance is achieved for outstanding awards, according to a Bloomberg estimate. That doesn’t include his defined benefit plan which was valued at $13.2m according to the company’s latest proxy filing. Muilenburg owns about $48 million of shares of Boeing outright.

One of Calhoun’s first moves Monday was to reach out to FAA Administrator Steve Dickson to discuss the leadership transition at Boeing, said a person familiar with the call who wasn’t authorized to speak about it.

“We expect that Boeing will support that process by focusing on the quality and timeliness of data submittals for FAA review, as well as being transparent in its relationship with the FAA as safety regulator,” the agency said by email.

Muilenburg’s departure caps an extraordinary fall from grace for an Iowa farmer’s son who had dreamed of turning Boeing into a globally admired corporate paragon, much as Welch did for GE. For two years as CEO, Muilenburg seemed to have the Midas touch. Then a brand-new Lion Air 737 Max plunged into the Java Sea on Oct. 29, 2018.

While the plane’s design was largely set before Muilenburg became CEO, he bore responsibility for the company’s initial muted response — and the media firestorm that ensued when a second Max crashed less than five months later in Ethiopia. He would later describe the Max tragedies as the most difficult moments of a career spanning more than three decades, all at Boeing.

Muilenburg, 55, joined the company from Iowa State University as an intern in 1985. Over the next three decades, the aerospace engineer rose to increasingly prominent positions at the defense business of the Chicago-based manufacturer. As head of the division, he drove deep cuts to maintain profits when Pentagon spending was stagnant.

He succeeded McNerney as CEO in mid-2015 amid the biggest sales boom in aviation history, fueled by low interest rates, readily available financing and the rapid expansion of low-cost airlines, particularly in Asia. Boeing’s 787 Dreamliner started generating cash months after Muilenburg took office, after a decade of losses. The plane, along with the highly profitable 737, funded the increasingly generous returns the company lavished on investors.

An avid cyclist fueled by diet Mountain Dew, the whip-thin Muilenburg brought an unapologetic, hard-charging edge to Boeing. “Compete to win,” became a company mantra. He demanded deeper discounts from suppliers while creating new businesses that poached sales from its partners in everything from cockpit electronics to the mini jet engines housed in an aircraft’s tail.

But the hard-nosed approach came back to haunt Boeing and its CEO. Responding to a preliminary accident report about the Lion Air crash, the company infuriated the carrier, one of its largest Max customers, by highlighting maintenance miscues on the doomed aircraft.

Boeing shocked pilots around the world after the accident when it revealed that an obscure flight-control subsystem known as Maneuvering Characteristics Augmentation System played a role in the accident.

While the company had described MCAS to Max operators, it had removed references from flight-crew manuals. The Lion Air pilots had no knowledge of the system, which was tripped by an erroneous sensor reading and then shoved the plane’s nose down more than 20 times until they lost control.

Regulators worldwide began grounding the Max hours after the March crash of an Ethiopian Airlines jet, even as Boeing’s leaders and the FAA stood by the plane and recommended more investigation before taking action. In the aftermath, Muilenburg sent a message to employees saying he was “confident in the safety of the 737 Max.”

His tone changed over the following weeks and months. “We’ve learned from both of these accidents,” Muilenburg said in an interview in September. “We’re humbled, and learning, but we’re also confident. We know we have a great company with great people.”

Boeing’s problems snowballed as additional problems arose and regulators expanded their review of the Max beyond MCAS. There was the revelation that a cockpit light that might have alerted the crews to the sensor malfunction was inoperable in most Max jets because of a coding error. While Boeing had known of the issue for more than a year, it didn’t alert the FAA or airlines until after the Lion Air crash.

As the grounding dragged on, Boeing faced the logistical challenge of storing hundreds of factory-fresh planes while keeping cash-strapped suppliers afloat. Fairly or not, the company’s laser focus on cash and costs reinforced a narrative that it had been lax on safety.

The leadership change was lauded by Michael Stumo, the father of Samya Stumo, who died on the crash of an Ethiopian Airlines jet on March 10. She was the grand niece of consumer activist Ralph Nader.

Michael Stumo called the crash “preventable” and said Boeing now needs to clean house on its board.

“Mr. Muilenburg’s resignation is a good first step toward restoring Boeing to a company that focuses on safety and innovation,” Stumo said in a statement. “Now that it’s known what he and top Boeing officials knew, yet ignored, prior to the crashes, it has become clear how the company eroded in quality over the years.”