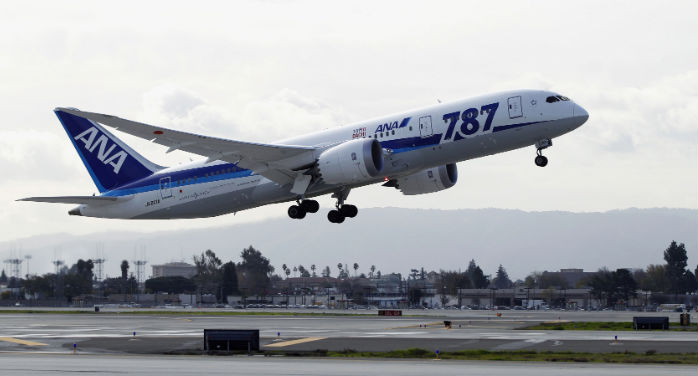 The US, Japan, Europe and India have grounded their Boeing 787 Dreamliner aircrafts following battery-related concerns with the aircraft.

On Wednesday, an All Nippon Airways 787 was forced to make an emergency landing in Japan due to a second battery-related issue this month; Japan Airlines said one of its Dreamliner’s batteries caught fire in Boston last week.

The latest commercial aircraft from Boeing has been facing a spate of issues in recent weeks including oil leaks, braking problems and a cracked window.

The US Federal Aviation Administration (FAA) confirmed earlier this week that it will start a review into the aircraft’s safety features, but the Dreamliner is only facing teething problems, says an expert.

“Since the 787 entered service in late 2011 with ANA, it has had a relatively trouble-free first year of service,” said aviation analyst Saj Ahmad.

“The recent spate of battery-related issues is uncomfortable for the travelling public. however, these sorts of issues do crop up on new airplanes and may not always happen in flight testing.

“That the FAA and Boeing are now working to review the 787 and the wider programme can only mean that in the long run, the 787 will be an even safer and reliable airplane than it is today. There are teething pains that can seldom be avoided – for the 787, that time is now,” he said.

Boeing said it stands “100 per cent” behind the integrity of its B787 Dreamliner.

Jim McNerney, the company’s chairman, president and CEO said that the “rigorous process” that led to the aircraft’s certification will ensure the issues can be put down to teething problems.

“We look forward to participating in the joint review with the FAA, and we believe it will underscore our confidence, and the confidence of our customers and the traveling public, in the reliability, safety and performance of the innovative, new 787 Dreamliner,” he said.

Ahmad agrees that there is no cause for concern for passengers flying on the Dreamliner.

“I’d have no issue flying one today and neither should anyone else. If there were any indication of danger, the FAA would never have certified it.

“It doesn’t help that the recent media coverage has tended to be sensationalist and at times, devoid of fact, but once this temporary grounding restriction is lifted, people will be able to fly the 787 with ease and little fear,” he said.

Boeing has sold around 850 new 787s and has delivered 50 planes to eight airlines in Qatar, Japan, India, South America, Poland, Ethiopia and the US.

Going ahead, Ahmad said it was difficult to predict what exactly will emerge after the FAA review.

“It’s premature to speculate what the fixes will entail given the closed-door nature of the Boeing-FAA review. That said, we know that the batteries are a cause for concern. We could see a redesign of the fail-safe systems of the lithium-ion batteries, or we could even see a complete change to nickel cadmium or lead batteries instead.

“Inspections across the 50-strong world 787 fleet will also help analyse any issues and help Boeing and the FAA understand what is happening, why it’s happening and what can be done to prevent such issues reoccurring,” he added.