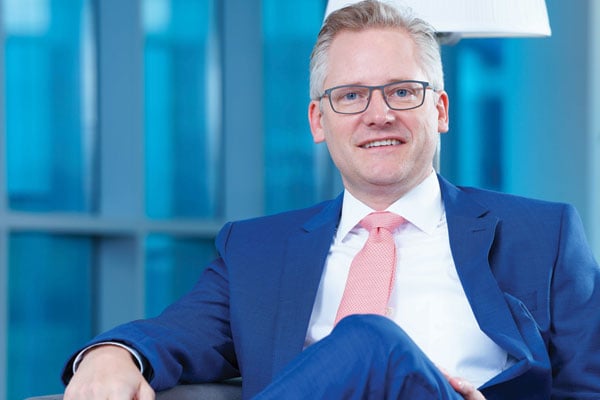 According to a report by the World Bank, $689bn was remitted globally in 2018. While India was the largest receive market, pulling in $79bn, China and Mexico followed, netting $67bn and $36bn respectively. That report though didn’t fully paint a picture of the changing relationship between traditional send and receive markets. “Sends from countries like Romania, Guatemala and Honduras didn’t even exist four to five years ago. Romania was historically a huge receive market, but suddenly it has become one of our largest growing send markets in Europe. In Latin America, Mexico, Honduras and Guatemala were nothing but receive markets, but money is now moving back to the US as people who migrated there many years ago have settled down,” explains Alexander Holmes, chairman and CEO of MoneyGram International, the second-biggest money transfer company in the world.

The Middle East is a pivotal remittance region. Saudi Arabia and the UAE are the world’s second and third largest outbound markets respectively. According to the UAE Central Bank, remittances from the country grew 3 per cent in 2018 to total $46.07bn.

“The UAE government has been very proactive in encouraging choice and convenience, as well as physical and digital access to remit money. The government has the concept of a sandbox to encourage Fintech,” says Grant Lines, chief revenue officer at MoneyGram, outlining why the remittance market is on the up in the UAE.

MoneyGram has been operational in Dubai for nearly 20 years and it is from the city that it runs its entire Middle East operations. It doesn’t have a license to operate as a standalone entity in the UAE and hence it partners with exchange houses and banks, a practice it employs worldwide. Its partners include Al Rostamani, Al Hilal, Emirates International Exchange and First Abu Dhabi Bank. “Recently, First Abu Dhabi bank launched payit, a mobile wallet app, which we’ve partnered on with the bank,” says Lines.

Teaming up with banks and exchange houses is a mutually beneficial strategy. MoneyGram has 350,000 global agent locations in 200 countries and territories worldwide and transfers money between 22,000 corridors. “Any bank might focus on a small number of corridors. The support that we can provide through partnership allows banks, exchange houses and retailers to cover any consumer that walks in,” says Lines of a market like the UAE, which remits money to 176-180 countries. Of the $46.07bn remitted in 2018 from the UAE, $10.97bn was routed through banks, a 5.6 per cent decrease year-on-year, while $35.09bn was transferred via exchange houses – a primarily cash-driven exercise.

“Cash is still very important in our industry – our mix of cash and digital is 84 per cent cash and 16 per cent digital,” says Lines. But the ground is shifting, especially in this region. “In the GCC, digitally-initiated transactions are broadly north of 40 per cent. When you’re 16 per cent as a global average, but 40 per cent here in the GCC, you get some idea of how fast things are changing,” adds Holmes.

MoneyGram, half-owned by private equity and the other half a public company, is amid a turnaround. It received a thumbs up from the markets in June when its shares surged over 160 per cent on the day it announced that blockchain company Ripple invested $30m in it. More importantly, MoneyGram added that it was partnering with Ripple to use the latter’s xRapid platform at the backend.

As Holmes explains, MoneyGram’s model was typically a ‘net-settle’ one wherein customers deposit money at a point of sale and agents pay out cash at another point of sale. The company would settle with the agents in the two locations every night and not physically move the cash between those two markets. “Ripple has large distributed blockchain technology and an interesting crypto coin like XRP can cross borders in seconds. What they don’t have is pools of global liquidity in fiat currency. We, however, have pools of money across the world and our speed is only enabled by the ability to pre-fund and move money in advance.

“One system is really fast but lacks liquidity, the other has massive amounts of liquidity but is inherently slow. With blockchain, you suddenly have this ability to move money at speed,” says Holmes.

While the implementation of Ripple’s xRapid platform on MoneyGram’s backend isn’t going to translate into an immediate tangible consumer advantage, that could change the moment cryptocurrencies gain the same leverage as fiat currency. But that scenario won’t go unchallenged. “If cryptocurrency can translate into fiat currency, it can be disruptive to cash markets. Most governments understand that, but most governments fear that too. As much as governments don’t like having cash in the system, they’re also worried about crypto which isn’t a currency of their country – a scary thought for central banks and governments who wonder how can they control and run a country if they don’t have control over their currency,” says Holmes.

The one governmental regulation that blockchain can help with is data localisation. Over the last 18 months, MoneyGram has made it mandatory to collect personal details of those transacting across its channels including the names, phone numbers, age, addresses of its customers. “Governments are beginning to mandate that data stays where the transaction occurs. It’s hard to comply with some of those laws because I can’t have a send and receive if data has to stay in one country. But with blockchain ledger technology, you can tokenise the money movements and payout the transaction on the other side. You can keep the data where you want and give the government access to the data it needs,” says Holmes.

The migration of sensitive financial data overseas is believed to have been one of the key reasons that the Trump administration blocked a $1.2bn takeover bid of MoneyGram by Alibaba founder Jack Ma earlier this year. But Holmes isn’t taking down the ‘for sale’ sign. “We are a public company and private equity owned. If there are interested buyers, they should get moving because our value is going to go up in the next couple of years.”