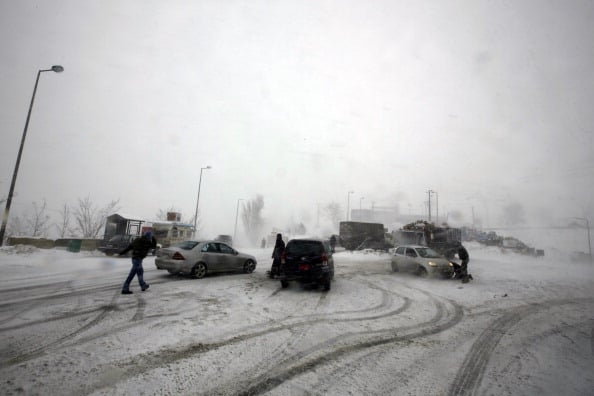 A storm buffeted the Middle East with blizzards, rain and strong winds on Wednesday, keeping people at home across the region and raising concerns for Syrian refugees facing freezing temperatures in flimsy shelters.

Snowfall and gales in Lebanon’s Bekaa Valley destroyed some refugee tents. “There’s no firewood, no diesel,” said Ali Eshtawi, a refugee from Homs who spoke by phone from a camp near the Syrian border where he said snow had caused three tents to collapse, leaving 19 people without shelter.

Snow blocked roads in the Valley, where more than 400,000 Syrian refugees are sheltering. A 35-year-old shepherd and an eight-year-old boy with him died in the storm in a mountainous area near to Syria, Lebanon’s National News Agency said.

The storm is forecast to last several days, threatening further disruption in Lebanon, Syria, Turkey, Jordan, Israel, the West Bank and the Gaza Strip, which have all been affected.

The International Federation of Red Cross and Red Crescent Societies made an emergency appeal in support of displaced people in Iraq and the United Nations launched a winter cash assistance programme to provide for 41,000 Syrian refugee children in camps in Jordan.

The Norwegian Refugee Council said the assistance was insufficient and said this could prove fatal for the refugees.

Damascus was carpeted with snow as were large areas of Turkey.

Night-time temperatures in Ankara were forecast to plunge to minus 17 degrees Centigrade.

Wind and rain struck the Gaza Strip, where infrastructure and thousands of homes were destroyed in a 50-day war with Israel last summer.

“Even nature is angry. I hope God is not angry with us … I am frightened for the fate of those without shelters, whose houses Israel destroyed,” said Gaza City resident Abu Ahmed, heading to buy fuel for a fire.

Gaza has electricity for six hours a day.