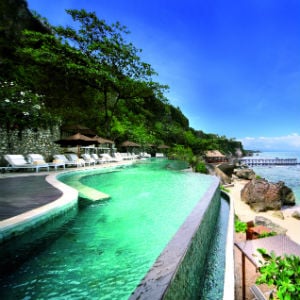 When you step off the plane in Bali, the warm weather is enveloping. And everywhere you look, you’re faced with greenery.

I had to revise this idyllic image moments later when we were locked in traffic for hours to get to our hotel. Poverty surrounded our hired van. It was hot and sticky. Children holding frangipani flowers knocked on car windows for change. The tiny streets were teeming with motorcycles, often carrying entire families. All this set against lush greenery, colourful hindu shrines, and blonde tourists carrying surfboards. Our first impression of the island would only be reinforced throughout our stay: Bali is a country of sharp contrasts.

At the chichi W hotel in Seminyak, a trendy part of town, we were greeted with lounge-bar lights and a massive UFO-like structure in the lobby. But after witnessing the simplicity outside the resort, we wondered if we really were on a different planet.

Our bags were whisked away and in no time we were in bikinis at the beach, sipping cocktails made with something called purple dragon fruit.

The W provided a perfect escape. Just one year old, the hotel has plenty of pools and swaying palm trees. The rooms are airy, with modern decor and lounge music that plays on cue every time the door opens. What’s more, W villas boast private pools that shimmer with the reflection of stars on a balmy Bali night.

A five-minute taxi ride took us to JL Oberoi road, the busiest street in Seminyak lined with restaurants and boutiques selling Balinese sarongs and crafts. Seminyak caters to honeymooners and families. Even trendy bars like Ku De Ta and Potato Head have children running around on the grass next to groups busy partying. Those looking for a high-adrenaline time will have more fun mingling with surfers in Kuta, the town next to Seminyak that is filled with dive bars and Australian college kids gone wild.

Ubud, a town in the heart of the jungle about two hours away from Seminyak, is the polar opposite of Kuta. When we arrived at the Viceroy hotel and descended the steps to the lobby, it was like entering heaven. Even the sunlight was streaming through the clouds in a way that looked photo-shopped. Monkeys eyed us suspiciously from trees and frogs scurried away from our path as we walked to our villa, which looked out onto a valley of dense greenery.

Ubud is the cultural heart of Bali, with art spaces and yoga spas lining the streets. Between the minimal nightlife and torrential rainstorms, we were concerned that we had travelled far only to rent DVDs to watch in our hotel room, but Ubud is full of surprises. Monkey Forest, which looks like an Indiana Jones film set, is home to thousands of gray macaques that will practically knock you down to get plantains out of your hand.

Evenings were spent at dinner overlooking the jungle by sunset. The hotel’s outdoor restaurant offered the perfect chance to catch a traditional fire dance performed by hundreds of chanting men in a Hindu temple or beautifully costumed Balinese dancers who move with the grace of geishas and dance with their eyes.

After adventurous rice paddy and volcano treks and playing with wild animals, we sank into the luxurious lap of the Ayana Resort in Jimbaran. The resort is a destination in itself, covering acres of land. It is also a parallel universe where you can rely on your butler to book a massage at the spa while you enjoy raspberry sorbet at a cabana near the saltwater infinity pool.

The resort has a world award-winning spa, offering traditional Balinese massages and an aquatonic pool with jet streams that will give you a workout. A perfume- making atelier on the premises gives ladies a chance to experiment with Balinese flowers like champaca and frangipani to create their own scent.

At the Kisik restaurant, you can choose your lobster or fish to be served at a table on the sand surrounded by tiki torches.

Crowds queue to sip on creative cocktails and snack on popcorn chicken at Rock Bar while watching one of the most beautiful sunsets in the world from the jagged cliff.

Driving back to the airport with a garland of frangipanis around your neck, a tan, and monkey horror stories, you will have a smile on your face reserved just for Bali.

Qatar launches first commercial charter flight to and from Kazakhstan