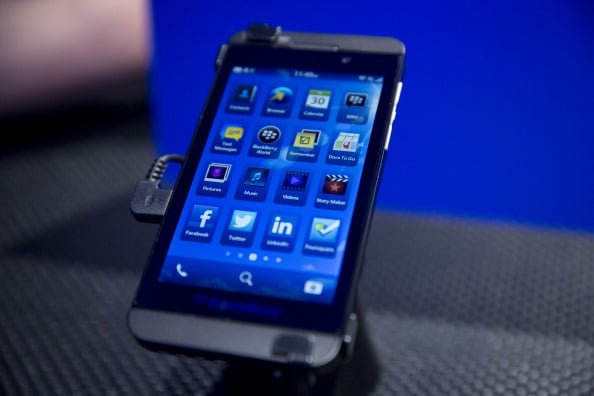 Research In Motion Ltd unveiled the long-delayed line of smartphones it hopes will put it on the comeback trail on Wednesday but it disappointed investors by saying U.S. sales of its all-new BlackBerry 10 will start only in March.

Chief Executive Thorsten Heins also announced that RIM was abandoning the name it has used since its inception in 1985 to take the name of its signature product, signaling his hopes for a fresh start for the company that pioneered on-your-hip email.

“From this point forward, RIM becomes BlackBerry,” Heins said at the New York launch. “It is one brand; it is one promise.”

RIM, which is already starting to call itself BlackBerry, had initially planned to launch the new BlackBerry 10 smartphones in 2011. But it pushed the date back twice as it struggled to work with a new operating system.

Ahead of Wednesday’s announcements, analysts had said that any launch after February would be a black mark for the Canadian company.

“The biggest disappointment was the delay in the U.S., that it will take so long before the devices get going there,” said Eric Jackson, founder and managing Partner at Ironfire Capital LLC in New York.

Heins said the delays reflected the need for U.S. carrier testing, although carrier AT&T offered few clues on what that meant.

“We are very enthusiastic about the devices. We will announce pricing, availability, and other information at a later date. Beyond that, nothing to add,” said spokesman Mark Siegel.

RIM launched its first BlackBerry back in 1999 as a way for busy executives to stay in touch with their clients and their offices, and the Canadian company quickly cornered the market for secure corporate and government email.

RIM shares tumbled along with the company’s market share, and the stock is down 90 percent from its 2008 peak.

The shares fell as much as 8 per cent on Wednesday, although they are still more than twice the level of their September 2012 low, reflecting ever-louder buzz about the new devices.

The new BlackBerry 10 phones will compete with Apple’s iPhone and devices using Google’s Android technology, both of which have soared above the BlackBerry in a competitive market.

The BlackBerry 10 devices boast fast browsers, new features, smart cameras and, unlike previous BlackBerry models, enter the market primed with a large application library, including services such as Skype and the popular game Angry Birds.

The BlackBerry Z10 touchscreen device, in black or white, will be the first to hit the market, with a country-by-country roll-out that starts in Britain on Thursday.

A Q10 model, equipped with small “qwerty” keyboard that RIM made into its trademark, will launch globally in April.

The Z10 device won a lukewarm review from Wall Street Journal tech blogger Walt Mossberg, who complained of missing or lagging features and a shortage of apps.

But David Pogue, who writes for The New York Times, apologized for describing BlackBerry as doomed in the past. The Z10 touchscreen device was “lovely, fast and efficient, bristling with fresh, useful ideas,” he said.

Announcements about pricing so far have been in line with expectations. U.S. carrier Verizon Wireless said the phone would cost $199 for a two-year contract, while Canada’s Rogers Communications is quoting C$149 ($150) for certain three-year plans.

RIM picked a range of venues for its global launch parties, including Dubai’s $650-a-night Armani Hotel, which occupies six floors of the Burj Khalifa, the world’s tallest tower.

The New York event took place in a sprawling basketball facility on the Lower East Side of Manhattan, just north of the Manhattan Bridge. The BlackBerry has been “Re-designed. Re-engineered. Re-invented,” RIM said.

RIM, which is splurging on a Superbowl ad to promote its new phones, also introduced Grammy-winning singer-songwriter Alicia Keys as its global creative director.

“I was in a long-term relationship with BlackBerry, and then I started to notice some new, kind of hotter, attractive, sexier phones at the gym, and I kind of broke up with you for something that had a little more bling,” Keys said at the New York launch.

“But I always missed the way you organized my life, and the way you were there for me at my job, and so I started to have two phones – I was kind of playing the field. But then … you added a lot more features … and now, we’re exclusively dating again, and I’m very happy.”