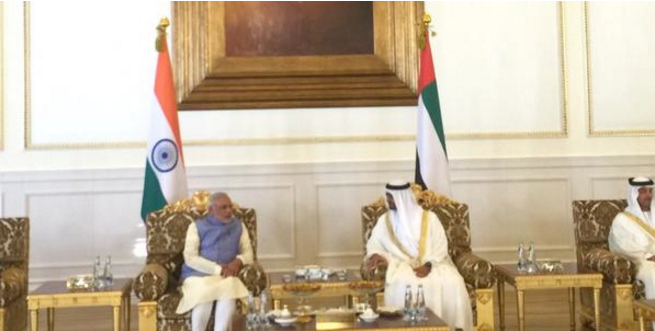 UAE investment to India worth billions of dollars is likely to be finalised as Abu Dhabi Crown Prince and Deputy Supreme Commander of the Armed Forces Sheikh Mohammed bin Zayed arrives in the country today.

When Indian prime minister Narendra Modi visited the UAE last August a $75bn fund to invest in Indian infrastructure was announced by the two countries.

Investments this time are expected to focus on energy and aerospace, according to UAE dailyThe National.

Fox Petroleum chairman and managing director Ajay Kumar told the publication that investment in terminals and refineries is on the cards.

The Crown Prince’s three-day visit will begin in New Delhi where he will be accompanied by a delegation of ministers, economists and almost 100 business executives. He will meet Narendra Modi tomorrow before travelling to Mumbai.

The visit comes as India looks to enhance foreign direct investment. Modi said previously that India needs $1 trillion of investment in a variety of sectors.

India’s economy is expected to grow 7.6 per cent this financial year, according to a recent growth forecast.

UAE companies including Emaar Properties and ports operator DP World are already actively investing in the country and carrier Etihad has a stake in Jet Airways.

The two countries announced plans in August to increase trade by 60 per cent over the next five years. UAE-India trade reached $59.15bn in the financial year to the end of March

“We do expect major investment from the UAE. There’s already a lot of bilateral trade. There’s a very cordial relationship between the two countries and there is a lot of scope for further trade and investment to open up,” Bombay Sugar Merchant Association chairman Mohan Gurnani told The National.

Kuwait’s Emir in hospital for checkups, Crown Prince to assume some duties