Big quake in Afghanistan and Pakistan kills over 200 - Gulf Business 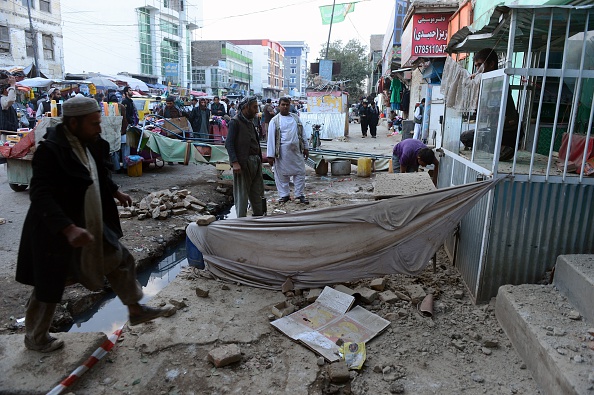 A major earthquake struck the remote Afghan northeast on Monday, killing more than 200 people in Afghanistan and nearby northern Pakistan, injuring hundreds and sending shock waves as far as New Delhi, officials said.

The death toll could climb in coming days because communications were down in much of the rugged Hindu Kush mountain range where the quake was centred.

In one of the worst incidents, at least 12 girls were killed in a stampede to flee their school building in Taloqan, just west of Badakhshan province where the tremor’s epicentre was located.

“They fell under the feet of other students,” said Abdul Razaq Zinda, provincial head of the Afghan National Disaster Management Agency, who reported heavy damage in Takhar.

Shockwaves were felt in New Delhi in northern India and across northern Pakistan, where hundreds of people ran out of buildings as the ground rolled beneath them. No deaths were reported in India.

“We were very scared … We saw people leaving buildings, and we were remembering our God,” Pakistani journalist Zubair Khan said by telephone from the Swat Valley northwest of the capital Islamabad.

“I was in my car and, when I stopped my car, the car itself was shaking as if someone was pushing it back and forth.”

The United States and Iran were among countries that offered to provide humanitarian assistance to Afghanistan, which already depends heavily on foreign aid after decades of war that have wrecked its economy and infrastructure.

The quake was 213 km (132 miles) deep and centred 254 km (158 miles) northeast of Kabul in Badakhshan province. The U.S. Geological Survey initially measured the magnitude at 7.7, then revised it down to 7.5.

Just over a decade ago, a 7.6 magnitude quake in another part of northern Pakistan killed about 75,000 people.

In Afghanistan, where rescue and relief work is likely to be complicated by security threats created by an escalating Taliban insurgency, more than 50 people were reported dead in several provinces including Badakhshan, where hundreds were killed in mudslides last year.

Hundreds of houses were destroyed, creating additional hardship with wintry temperatures setting in.

Officials said most of the casualties had occurred in northern and northwestern regions bordering Afghanistan and the death toll was likely to rise.

Dr. John Ebel, chairman of the Department of Earth and Environmental Sciences at Boston College in the United States, said the depth of the earthquake had limited its severity and meant damage was likely to be spread broadly rather than focused in one disaster zone.

But he said landslides on the unstable slopes of the mountainous region could pose a major problem to rescuers in the coming days.

“Obviously if a landslide comes in to a village, it will take out buildings, but landslides can also take out roads and communications and power systems, so you lose the ability to access remote areas,” he said.

In Pakistan, the northern area of Chitral, where 20 people were killed, was particularly hard hit.

Journalist Gul Hammad Farooqi, 47, said his house had collapsed. “I was thrown from one side of the road to the other by the strength of the earthquake. I’ve never experienced anything like it,” he said.

“There is a great deal of destruction here, and my house has collapsed, but thankfully my children and I escaped.”

Further south, the city of Peshawar reported two deaths and at least 150 injured people were being treated at the city’s main hospital, the provincial health chief said.

In Afghanistan, international aid agencies working in northern areas reported that cell phone coverage in the affected areas remained down in the hours after the initial quake.

“The problem is we just don’t know. A lot of the phone lines are still down,” said Scott Anderson, deputy head of office for the U.N. Office for the Coordination of Humanitarian Affairs in Kabul.

The earthquake struck almost exactly six months after Nepal suffered its worst quake on record on April 25. Including the toll from a major aftershock in May, 9,000 people lost their lives there and 900,000 homes were damaged or destroyed there.

The Hindu Kush mountain region is seismically active, with earthquakes the result of the Indian subcontinent driving into and under the Eurasian landmass. Sudden tectonic shifts can cause enormous and destructive releases of energy.