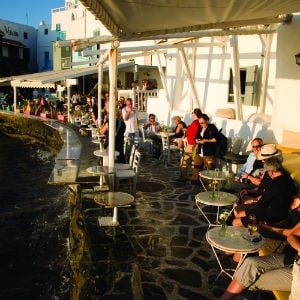 In Mykonos, it seems that food tastes better, people are better-looking, music is constant and there will always be traces of sand on your clothes. A typical day is spent souvenir shopping or playing volleyball on the beach long enough to perfect a tan and work up an appetite. Nights are spent dancing until dawn. The energy of Mykonos infects travelers long before they even arrive to the Aegean island; whether on a boat or a flight, Greek and foreign tourists will be wearing flip-flops and swimwear beneath their clothes, pumping fists in the air to imaginary music.

There is something about the island that encourages everyone to let loose. A shy dancer? On a diet? In Mykonos, you will find yourself in line for a Nutella crepe at 3 a.m. after dancing on tables for most of the night. The group in front of you will be 18 year-old Italian girls, those standing in line behind you will be a Greek family with toddlers. The city throbs with life at night, seducing you to uncover new sides of your own personality to keep up with its pace.

Most of the action takes place in Mykonos Town, or Chora. Here, some of the streets are so narrow you have to walk sideways, single file, in order to squeeze through to the other side. Shops, cafes and restaurants are all white, with blue doorframes and staircases, and the majority remain open for business nearly until dawn. Winding cobblestone streets make it hard to walk in heels. People and laughter spill out onto the alleys from crowded cafes and bars.

There are a plethora of restaurants in the Chora to choose from and the best meals are often found at traditional eateries in random alleyways – the best way to find them is to lose yourself in the streets. One such Greek taverna, Chez Catrane, is an upscale locale that is a favorite of Queen Rania’s, according to the owner. The restaurant offers traditional
Greek cuisine, such as stuffed tomatoes, fresh fish in olive oil, and spinach pie. Another popular eatery is Pasta Fresca, located in one of the busiest streets in the Chora, with a display of homemade pasta set outside to entice passersby.

The heart of town stretches all the way to the old port, where the air is perfumed with sea salt and the strip is studded with seaside cafes. From here, Mykonos’s infamous windmills, built in the 16th century, can be seen in the distant hillside, standing tall and proud like soldiers overlooking the city.

Mykonos is known as much for its nightlife as it is for being a very windy city – there are 16 windmills that can be seen from practically any location on the island. Whether you are in a packed, narrow alleyway or admiring the reflection of the moon on the water at the open port, the playful wind will find a way to lift up your skirt and ruffle your hair.

During the day, a break from the sun is achieved by spending time in one of the island’s many beaches. The beaches are up to half an hour away from the heart of the Chora, but worth the trip. Psarou beach is one of the closest locations to downtown, featuring one of the busiest restaurants in Mykonos. Nammos Restaurant overlooks the sandy Psarou beach, where sun beds have cushions thicker than mattresses. They are hardly used, though, because the music pumping from the restaurant has everyone dancing in the sand, in the water, even on the tables while lunch is being served. A group of Argentinean men will be partying on a table next to one where a grandfather and his granddaughter are dancing on chairs.

They only stop moving long enough to try the exquisite prawn, cheese and meat dishes passed around at the tables.

Panormos is a calmer beach approximately 20 minutes away from Chora. Here, soft lounge music takes a backseat to the sound of ocean waves and tennis balls hit back and forth by the shore. There are no sun beds, but rather big pillows set on the sand, warm from the touch of the sun.

With so much activity, it is almost seems pointless to sleep. Still, some resorts, such as the five star Belvedere overlooking the city and located steps away from the Chora, are so lovely it is tempting to spend most of your time at the hotel pool and in your room. Most of the other luxury resorts are located at beaches, rather than Chora, such as Mykonos Blu at Psarou beach. July, August and early September are the busiest times of year on the vibrant island, so be sure to book weeks in advance at hotels, beaches (for sun beds) and restaurants. And don’t forget your dancing shoes.