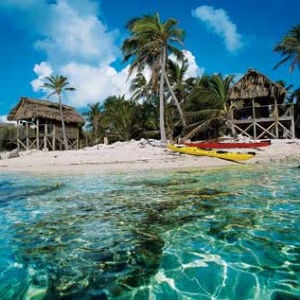 Belize is not on the beaten path for nature-loving travellers, but perhaps it should be. For starters it has a long barrier reef, vast areas of unspoilt rainforest, a friendly, English-speaking population and exemplary conservationist approach to its natural and Mayan cultural heritage.

In particular, the waters around Glover’s Reef at Long Caye, Belize are thought to be some of the most stunning the country has to offer. The reef comprises an 82-square mile shallow lagoon surrounded by deep waters of the open sea.

Within this there are more than 700 pristine patch reefs brimming with the richest variety of marine life in the Caribbean – from the delicate fan coral and spiny urchin to the colourful stoplight parrot fish and elegant southern sting ray.

Snorkellers and divers are often enchanted by the spectrum of sea life, in particular ‘The Wall’, which is known as a world-class dive site off the back of Long Caye. The island has its own dive centre for those who wish to discover the underwater world.

The resort at Long Caye is as rustic as it gets and there are cabanas available for hire – although don’t expect luxury here. It’s fairly simple and unpolished with its solar-powered water pumps, no maid service, no air-conditioning and no flush toilets – this is a place to be at one with nature.

For wildlife viewing, the June-July period can be the best time because the fresh rains bring out the wildlife after the stifling heat of May.

During the rainy season, a ‘mauger’ which translates to ‘little dry’ occurs but due to the fact the overall precipitation only varies a little between the seasons, Belize can be seen as a year-round destination. Only avoid September and October when the hurricane season can strike.