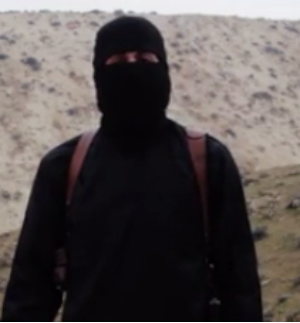 The “Jihadi John” masked fighter who fronted Islamic State beheading videos is Mohammed Emwazi, a Kuwaiti-born Briton from a prosperous family who grew up in London and graduated with a computer programming degree, according to the Washington Post.

In videos released by Islamic State (IS), the black-clad militant brandishing a knife and speaking with an English accent appears to have decapitated hostages including Americans, Britons and Syrians.

The Washington Post said Emwazi, who used the videos to threaten the West and taunt leaders such as President Barack Obama and British Prime Minister David Cameron, was believed to have travelled to Syria around 2012 and to have later joined IS.

“His real name, according to friends and others familiar with his case, is Mohammed Emwazi, a Briton from a well-to-do family who grew up in West London and graduated from college with a degree in computer programming,” the Post said.

In each beheading video, he is dressed entirely in black, a balaclava covering all but his eyes and the ridge of his nose. He wears a holster under his left arm.

Hostages gave him the name John as he and other IS Britons had been nicknamed the Beatles. Another was dubbed George.

British government sources and the police refused to confirm or deny the report, citing a live anti-terrorism investigation, a position mirrored by a spokeswoman for Cameron.

“We don’t confirm or deny matters relating to intelligence,” the spokeswoman said. “I am not going to get into the details of an ongoing police and security investigation.”

“We have said since we have seen the awful actions being taken by these terrorists that we are absolutely determined to bring the perpetrators to justice, and the police and the security agencies have been working hard to do that, continue to work hard to do that and that is what we want to see,” she said.

Since a video surfaced in August 2014 showing a masked man raging against the United States before apparently beheading U.S. citizen James Foley off camera, “Jihadi John” has been one of the world’s most hunted men.

Intelligence services in Britain and the United States were ordered to track down the masked man who became a menacing symbol of the brutality of IS. Authorities used a variety of investigative techniques including voice and facial recognition as well as interviews with former hostages.

The services had chosen not to disclose his name for operational reasons.

It was not immediately possible to confirm whether Emwazi is indeed Jihadi John. There was no answer at addresses in London where Emwazi was listed as living.

But the London-based International Centre for the Study of Radicalisation said it believed the detailed Washington Post report was accurate.

The Post quoted one of Emwazi’s close friends as saying: “I have no doubt that Mohammed is Jihadi John. He was like a brother to me ... I am sure it is him.”

The Post quoted the friends of Emwazi, who spoke on condition of anonymity, as saying they thought he had started to become radicalised after a planned safari in Tanzania following his graduation from the University of Westminster in London.

They said Emwazi and two friends – a German convert to Islam named Omar and another man, Abu Talib – never made it to the safari. On landing in Dar es Salaam, in May 2009, they were detained by police and held overnight before eventually being deported, they added.

In a statement, the University of Westminster said a Mohammed Emwazi had left the college six years ago. “If these allegations are true, we are shocked and sickened by the news,” a spokesperson said.

The Post said Emwazi claimed that representatives from Britain’s MI5 security service had tried to recruit him. He later tried to move to Kuwait but was detained by counter terrorism officials in Britain in 2010.

Emwazi was prevented from travelling but eventually found a way to Syria in 2012, it added.