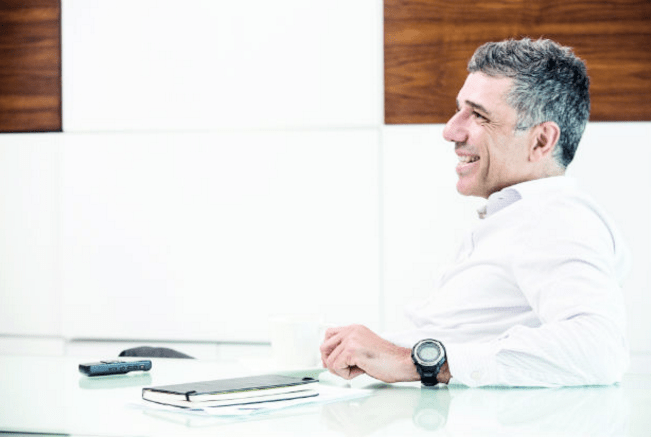 For Rabea Ataya, the quest to become an entrepreneur stemmed from a need for personal freedom.

“Entrepreneurship is a great career choice for people who value freedom greatly,” he says with a hint of passion in the boardroom of Bayt.com’s offices in Dubai’s TECOM district.

This desire has led him on a journey from founding his first business aged 25 to the inspiration for the company he leads today – the region’s largest job site.

Now celebrating its 15-year anniversary, the firm is connecting hundreds of thousands with jobs each year. But there is a sense that this is just a milestone on a longer road for the chief executive.

And over the next half an hour – as we discuss how he got here, the jobs market and entrepreneurship – it is clear he is not done yet.

From banking to Bayt.com

It was the desire for the freedom of entrepreneurship that first led a 21-year- old Ataya to seek a career in investment banking.

He saw the industry as a logical step between his master’s in electrical engineering and starting a business. Most importantly, it allowed him to interact with entrepreneurs who had achieved a certain degree of success – either going public, buying other businesses or being bought themselves.

Four years later, aged 25, he was then ready to start his first company. The inspiration for records management firm InfoFort – acquired by Aramex in 2005 – was simple enough. Dubai was on the up, international firms were arriving, real estate was becoming more expensive and paper production was increasing immensely.

This personal service was partly due to his experience working at his father’s construction firm – an industry he describes as having “too many variables”. In contrast, records management was a “controlled environment, great customers and great cash flow,” he says.

It was then, as Ataya expanded InfoFort’s regional operations, that he was struck by one of the key hurdles the firm was encountering.

“Our single biggest challenge was hiring people,” he recalls. This was surprising considering the high percentage of unemployed young people he encountered in the region.

“I realised the challenge wasn’t a lack of opportunity or talent but it was the fact that the way opportunity and talent met was highly inefficient,” he says.

This observation and the advent of the internet in the region in 2000, led Ataya to found Bayt.com in InfoFort’s then warehouse in the Al Quoz area of Dubai.

Comparing those days to the current entrepreneurial landscape he says much has changed, for better and for worse.

On the plus side, entrepreneurship’s importance in addressing regional economic and unemployment woes is better recognised. The number of mentorship programmes is growing, as is venture capital and government interest. But equally setting up a business today is not as simple as it was in 2000, he says.

“Across the region, often times there are a lot more bureaucratic hurdles to jump. The cost of doing business has increased tremendously from 2000 to now. For a young entrepreneur at the start of their journey, there are lots of positives but also a fair number of obstacles that need to be overcome to get things done.”

Since 2000, Bayt.com’s user base has grown in line with regional internet penetration. This stood at around 2 per cent when the firm was founded, compared to the figure of more than 50 per cent seen across the Middle East today.

The site now boasts the resumes of about 21 million professionals. As Ataya is proud to point out, this is a larger population than most countries in the region and likely to overtake the largest in the not too distant future.

“More people, without a doubt, find their jobs through job sites than through any other medium available in the region and of the jobs sites more find their job on Bayt.com than any other job medium out there.”

Although, he admits traditional recruiting – with its human element – still holds some value, despite the emergence of tech-savvy heavyweights.

“It [traditional recruiting] will be a smaller piece of the entire pie but I don’t think that the piece will disappear.”

As the business has grown Ataya has also turned his attentions to some of the clear challenges for employers in the region through the company’s surveys and research. Among them a lack of clear salary benchmarking telling businesses how much to pay prospective employees and the sheer volume of applicants some firms in the region receive.

“In Europe, your average job site will get 30 applicants per job and they will tend to be from the same country as the job. In the Middle East, your typical job will get over 500 applicants and those applicants will come from everywhere in the world,” he says.

But perhaps most significant is a skills shortage in the talent pool – more specifically at a graduate level. People in the region leave university with acceptable ‘hard skills’ but the ‘soft skills’ – like communications, teamwork and willingness and the ability to learn – are lacking, Ataya says.

“We haven’t developed enough of a culture in the region of people starting work earlier on in their lives and getting experience of what the workspace is like. For the most part, people graduate from university never having worked a day in their lives and that creates issues.”

Even simple steps like teaching interviewing techniques could have an impact. Horror stories of graduates turning up late, poorly dressed, having not researched the company or immediately asking the working hours and pay are all too common, he reveals.

“Those are interviewing no no’s by any global standard and to a large degree its just lack of experience. A small investment could go a long way.”

Referring more generally to rates of high unemployment among the region’s youth, Ataya says nationalisation progammes have borne fruit. He points to Oman’s highly Omanised workforce and a similar story in Bahrain. Efforts in Saudi Arabia too are quickly changing the workplace.

“There are challenges with these programmes but I think on the whole they are necessary and in the long run they will bear fruit,” he says. “Although there might be short-term pain.”

As well as its jobs listings, the company now offers a software-as-a-service platform for corporate recruiting needs. Few realise that several of the top companies in the region use a Bayt.com platform for their careers webpage.

“For us, that is a wonderful place to be because we’re at the nexus of recruiting efforts for the company. It is not that we’re just the sourcing platform for the talent, we also manage the entire recruiting process.”

The company is also expanding its virtual events platform for managing exhibitions online, and engaging with mobile users. Around 50 per cent of its traffic now comes from the mobile app and website, compared to none only two years ago.

Then there are of course opportunities in the physical world. Following Bayt’s expansion to Egypt two years ago the growth potential of other North African nations is being considered, he reveals. This shifts our discussion to another potential market, Iran with its population of nearly 80 million people that could soon be more active in the regional jobs market.

“We obviously have questions as to when it will open up and what form it will come in. So at this stage we’re looking closely, and hoping that we can act soon.”

More broadly, Ataya has continued to dip into entrepreneurship. Another firm he helped found – group-buying site GoNabit.com – was sold in 2011 to LivingSocial and he continues to launch and grow businesses, including automobile portal YallaMotor.

When asked if he plans to found any more companies, the serial entrepreneur does not rule anything out.

Judging by Ataya’s track record, his next venture may be just around the corner.