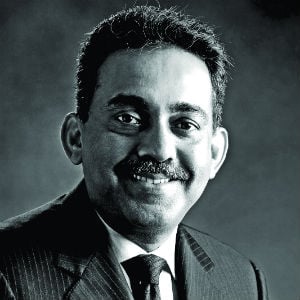 “I would have said you’re crazy,” says V. Shankar, CEO of Standard Chartered for EMEA and the Americas, “if in January you’d come to me and said expect regime change in Tunisia, Egypt, plus what’s happened in Libya and Bahrain. It’s taken everyone by surprise, but when you have fundamental mega-events that change the world very often you can’t predict them.”

The political upheaval is a watershed moment for the Gulf, he says, but the writing was on the wall for a while. “If you look at all these places there’s commonality, including the increasing demographic of educated youth, growing use of social media, high unemployment and inflation.”

Bahrain’s uprisings, in particular, have unnerved foreign banks operating in the Gulf. Political violence led to reports that the likes of BNP Paribas, Citigroup, HSBC and Standard Chartered had lifted staff out of the kingdom.

It was widely held that as clashes between security forces and anti-government protesters escalated, some financial firms shut branches, citing safety concerns.

But Shankar is defiant: “Despite what you read we have shifted nobody out of Bahrain. Everyone is in exactly the same place as they were in December. Even during the protests Dan Azzi, our co-head of wholesale banking, was in town and did not leave the country. The aim was to keep branches open every day.”

Standard Chartered has a sizeable presence in Bahrain, although it makes up less than one per cent of the bank’s global business. Shankar says overall the Gulf unrest has had little impact on the performance of the bank.

His confidence caps a solid set of results last year, which saw the bank’s net profit in the Middle East and South Asia region more than double to $841 million. In the UAE alone, its income grew six per cent to $1bn.

Standard Chartered, whose roots are traced to British colonial expansion in Africa and India in the 19th century and now earns most of its profit in Asia, is seeing the UAE emerge as a “standout performer”, says Shankar.

“Dubai has emerged as a regional safe haven and is benefiting from the unrest in its core areas of tourism, transportation and trade. The UAE government has provided support for banks by pumping in capital, therefore providing a floor for credit risk. Some banks still need to work out their legacy portfolios but with valuations improving and better macroeconomic conditions in general the picture is looking good.”

The anti-government movements in Bahrain, Oman, Egypt and Libya have pushed up the cost of borrowing across the region as well as raised oil prices, but it won’t hurt Dubai’s ability to refinance about $18 billion of loans this year, he says.

Dubai and its state-owned companies ran up debt of at least $129.3 billion, according to estimates by Credit Suisse Group, as the emirate developed its property, tourism, trade and financial-services industries.

Shankar says the financial mismanagement is unlikely to stoke political instability in the Emirates because of the high level of per capita affluence.

“The chances of unrest are negligible to non-existent. The local population is pretty well looked after. There’s been a far better distribution of wealth in the UAE, especially in the form of subsidies, than other countries in the region. Put it this way, you don’t see many poor Emiratis.

“Plus, there’s a far higher degree of openness in the system which acts like a pressure release valve. When you want to look for opportunities in the region for people that don’t belong to the royal family, the one place you stand a chance of having a meritocracy is Dubai.”

Bahrain, the smallest country in the Gulf with around 1.1 million inhabitants, established itself as a regional financial hub in the 1970s, long before the rise of Dubai and Doha. But a prolonged period of unrest in Bahrain would serve Doha and Dubai well as investors seek stability.

“The DIFC is the busiest I’ve ever seen it. This is also related to the fact that globally there’s been an economic recovery and people that left Dubai are coming back. Plus, office rental rates have been adjusted down to more realistic levels and more in line with the market, so that has helped activity. Add to this Dubai’s attractiveness from a tax perspective and things are looking good.”

There is trouble in paradise though for the British bank, which has become a victim of its Asia focus. A new UK bank levy is likely to put it at a competitive disadvantage against overseas rivals

Only 2,000 of Standard Chartered’s 85,000 staff are based in the UK, but the bank is still subject to the levy, which represents an additional fixed cost for larger banks operating in the UK.

British finance minister George Osborne recently proposed raising the bank levy rate next year in order to offset a cut in UK corporation tax, but analysts Standard Chartered, and rivals HSBC, would be impacted slightly more than their rivals since they make most of their profits overseas.
Shankar says its rationale for keeping its headquarters in London is weakening, it has no plans to shift headquarters.

He adds that a recent clampdown in Europe on bankers’ bonuses is also hurting the firm “The rules on compensation that apply to British and European banks also put us at an additional competitive disadvantage. What we need is a globally consistent set of principles that apply to all. In short, we need a level playing field.”

Cost control remains a major concern for banks in the Gulf as scarcity of talent, intense competition in the industry and reluctance among bankers to settle in the region force salaries rapidly higher.

The bottom line is that the bank is paying more to attract employees. The bank is expected to hire about 1,000 staff this year, reversing this outward flow.

Shankar says: “When you talk about expenses there is always a period in which you invest and harvest. It’s very difficult for both these concepts to co-exist. In 2010, we invested at a rate higher than our income, particularly in the wholesale bank. The year before the growth rate outran the costs, so if you look at it as a two-year cycle then 2011 is a year that we won’t invest much but will see a return.”

Staff costs for its employees worldwide accounted for $5.76 billion last year, a 17.3 per cent increase on 2009. Of that figure, total compensation for the bank’s five highest earners accounted for $41.7 million.

The ongoing unrest in the region has applied upward pressure to salaries as foreign candidates factor in a risk premium of working amid instability. Most analysts agree that the longer these risks exist the worse it gets for banks’ cost control efforts.

Shankar says Standard Chartered’s heavy UAE bias, where it employs 2,400 of the 3,000 MENA staff and earns most of its income, will stand it in good stead.

But that’s to underestimate the lessons learned from the rapid change in the region since January. Indeed, who’s to say what counts as crazy today won’t emerge as a grim reality by next January.