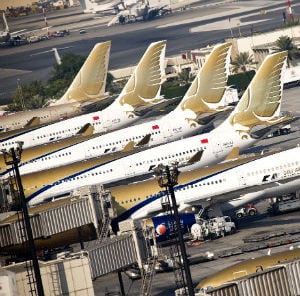 Gulf Air Bahrain’s struggling national carrier Gulf Air reported that revenue increased six per cent during the first half of the year compared to the same period last year. Passenger numbers rose 13 per cent during the period, while the seat load factor reached 77 per cent, the carrier announced in a statement.

Gulf Air CEO Samer Majali said: “This is by no means a small achievement considering factors such as the temporary suspension of eight profitable routes and high fuel prices that have had a negative impact on our traffic and revenue.”

The airline has been undertaking major restructuring and cost-cutting initiatives to reduce losses.

“We are pushing forward with our cost-efficiency and sales efficiency measures in 2012 and are targeting a further 15 per cent reduction in its cost base for the full year; we have already achieved a cost base savings of BD6.8 million between January and May this year,” Majali said.

Earlier this month, Gulf Air announced that it had pushed forward its winter timetable to begin from September 10 and that it had introduced several new flight paths across the Middle East.

The airline also aims to resume flights to Iran and Iraq following the Bahrain government’s approval.

Gulf Air had stopped flying to the two countries in 2011, but will recommence routes to Iraq’s Baghdad, Erbil, Najaf and Basra from September 20 this year and Tehran, Mashhad, Shiraz and Isfahan in Iran.

The restarting of flights is subject to final approval by the civil aviation authorities of both countries.