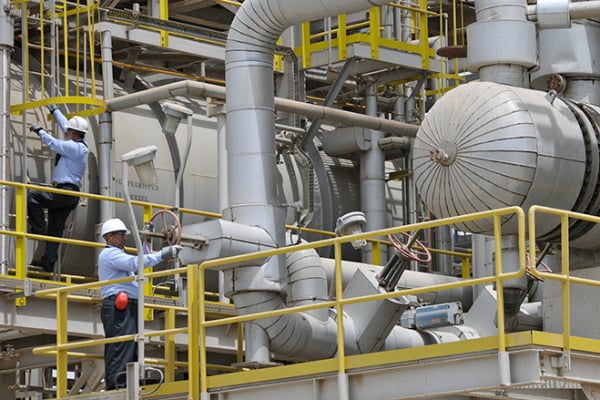 Bahrain plans to commission its expanded oil refinery by early 2023, allowing it to sell and trade more petroleum products in the Gulf region and Asia, the chief executive of state-owned oil company Bapco said.

The expansion will boost the capacity of its Sitra oil refinery to 360,000 barrels per day (bpd) from the current 267,000 bpd, Bapco CEO Pete Bartlett told Reuters.

Bapco currently receives 220,000-230,000 bpd of crude from state oil company Saudi Aramco and will import the same volume during the refinery’s expansion, with commissioning scheduled for late 2022 or early 2023, Bartlett said.

In October 2018 Aramco and Bapco announced the commissioning of the AB-4, a new phase of the Saudi-Bahrain crude oil pipeline, capable of transporting up to 350,000 bpd, which would serve Bahrain’s planned refinery expansion.

“We are on track,” Bartlett said of the expansion.

The small non-OPEC Gulf oil producer, with around 124.6 million barrels of proven reserves, gets its oil revenue from two fields: the onshore Bahrain field, and the offshore Abu Safah field, which is shared with Saudi Arabia. The Bahrain field produces around 50,000 bpd.

“Aramco and Bapco are strong partners and so our purchases of feedstock are unaffected by what OPEC is doing in terms of managing its own sales,” Bartlett said when asked whether Saudi exports to Bahrain would be affected by OPEC-led supply cuts.

The refinery expansion and resulting production increase may prompt Bapco to focus more on spot trading, but the company is unlikely to establish its own trading joint venture like other national oil companies in the Middle East, Bartlett said.

“We will buy more feedstock and will be trading more products,” Bartlett said, adding the company would continue to look also at trading spot cargoes.

“We will be looking to develop off-take arrangements and sale arrangements further but our core markets will remain within the greater GCC (Gulf region) and increasingly we will find ourselves competing for opportunities in Asia.”

Around 88 per cent of the crude that Bapco refines comes from neighbouring Saudi Arabia, and the rest from Bahrain’s field.

The refinery’s expansion project financing – which is over $4bn in size – will be finalised in March, Bartlett said.

“We have been actively working with a number of export credit agencies and commercial banks … We’re on the cusp of concluding the financing arrangements.”

Bapco had awarded contracts for the project to a consortium comprising TechnipFMC, Samsung Engineering and Tecnicas Reunidas.

Bahrain announced last year its largest ever oil discovery, off the coast, estimated to have at least 80 billion barrels of tight oil, and deep gas resources in the region of 10-20 billion cubic feet.

It is talking to US oil companies with shale oil expertise about developing those resources and hopes to have an interested company by the end of the year, the country’s oil minister told Reuters last month.