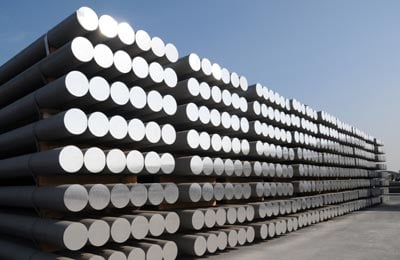 Aluminium Bahrain (Alba), owner of the world’s fourth-largest aluminium smelter, wants to take a stake in a mine or refinery as its impending expansion increases its demand for raw materials, its chief executive told Reuters.

The firm has begun feasibility work on a $2.5 billion sixth production line which will increase annual capacity by 400,000 tonnes, when it comes online at the end of 2015, from its current production of 890,000 tonnes a year.

Given the additional demand for raw materials the new line will create, a focus on securing supplies at source instead of buying everything on the open market, becomes more important, CEO Tim Murray told Reuters on the sidelines of a conference in the capital Manama.

“For line six, it would probably be an interesting opportunity to look for maybe a joint venture partner or an equity swap,” said Murray, who was promoted from chief finance and supply officer in October.

Murray added the firm may take a small stake in either a bauxite mine or a new or existing refinery, with India among likely options given its proximity to the Gulf Arab region in comparison with other candidates like Guinea.

Such decisions will form part of the expansion’s feasibility study, which Bechtel Canada was appointed to undertake in December and which is due to be completed in the third quarter.

Much of the funding for the expansion will be raised from export credit agencies and both commercial and Islamic banks, with a bond also part of the package, Murray said, adding the firm was currently securing a credit rating.

However, Alba has no plans to raise further corporate debt after securing bank loans in December to pay off a $169 million bond due to mature this month.

BNP Paribas is financial adviser on the line six expansion.

Alba expects 2013 profit to be in line with last year after its energy costs were held at 2012 levels and the forecast for aluminium prices remains steady.

The firm has verbal confirmation from the country’s state-run energy supplier that it will pay $2.25 per million British thermal units (mmBtu) for gas this year, Murray said.

Energy is a significant proportion of the cost of producing aluminium, with a $0.75 per mmBtu hike at the beginning of 2012 contributing to a 54.4 per cent slump in net profit last year.

The main dent in last year’s profit level came from a 16-percent drop in the average aluminium cash prices at the London Metal Exchange to $2,019 per tonne from $2,398 a tonne in 2011.

Murray said the company would like to see higher LME cash prices but it was expecting them to average between $2,000 and $2,100 per tonne in 2013.

“The LME prices are not where we’d like it – we hope that will pick up – but if you look into the future, the demand of the metal itself is very good, with five per cent annual growth a realistic figure,” Murray said, adding Alba hoped production would be 900,000 tonnes this year, up 10,000 tonnes on 2012.