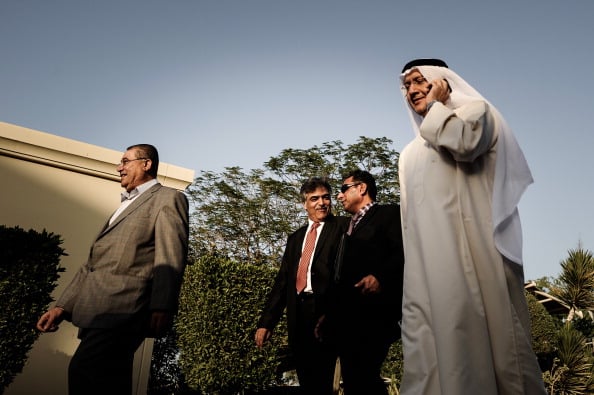 Bahrain’s government and opposition held reconciliation talks on Sunday for the first time since July 2011 to try to end two years of political deadlock in the strategically vital Gulf Arab island kingdom.

Home to the U.S. Fifth Fleet, the tiny state has been hit by unrest since mass pro-democracy protests in early 2011, becoming a front line in a region-wide tussle for influence between Shi’ite Muslim Iran and Sunni Arab states such as Saudi Arabia.

While opposition members have expressed very cautious optimism that the talks represent a meaningful step forward, they have also voiced concerns that the agenda remains unclear.

Negotiators for the six opposition parties said as they were leaving Sunday’s session that they would continue the dialogue, at least until the next meeting on Wednesday, but that they would meet on Monday to discuss the way forward.

The sides have still to agree on the agenda and schedule, although they have decided to limit the scope of discussions to resolving political differences, and to meet twice a week while talks continue.

Asked if he thought government negotiators had showed they were serious, Salman said: “Not yet. For me they didn’t show us that … But they showed us that they can listen to us, which is a positive step.”

The main opposition Wefaq movement has commanded nearly half the electorate in past parliamentary votes but the government has refused to budge on opposition demands to give the elected chamber of parliament the power to form cabinets.

Justice Minister Sheikh Khaled bin Ali al-Khalifa told journalists that the session had been a positive start and it “confirmed the importance of this dialogue”.

The opposition walked away from reconciliation talks in July 2011, saying they were not carried out fairly.

“We hope we can reach in the first sessions a good agenda that will be acceptable to all,” said Samira Rajab, Bahrain’s information minister, before the session.

Of the 24 other participants, eight are from the opposition, eight from pro-government parties and eight from Bahrain’s national assembly, made up of the appointed Shura Council and an elected chamber.

“The issue in this country is between the government and the opposition. They are the real stakeholders. But there are lots of others who will sit around the table,” said Jasim Husain, a former Wefaq member of parliament.

During the 2011 talks, opposition members complained that Wefaq was given only one out of 60 seats in the dialogue, the same number as very small pro-government parties.

One opposition demand now is that more senior government figures than the ministers already involved join the process.

“We need someone from the government who can say yes or no. Somebody from the king himself,” said Salam.

The government has accused the opposition of acting on behalf of Tehran, which has denied the accusation.

The opposition has said its main conditions for continuing the talks are that ruling family members attend, that the talks bring about decisions rather than recommendations, and that the result is put to a public referendum.