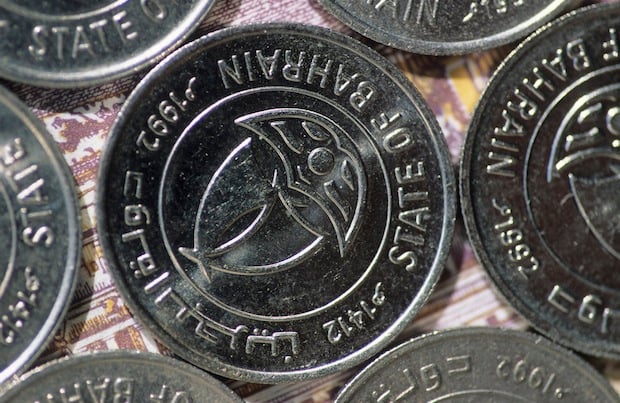 Bahrain’s dinar sank to a 17-year low against the U.S. dollar on Tuesday as hedge funds dumped Bahraini bonds because of concern about the country’s rising public debt, regional bankers said.

The dinar dropped as low as 0.38261 to the dollar in the spot market. The bankers said they did not detect any concerted attack on the currency, but a plunge in Bahrain’s international bond prices in recent weeks had fuelled jitters in the foreign exchange market.

The central bank, which pegs the dinar at 0.37608 and sells dollars when needed to keep its currency close to that level, said in a brief statement that it was committed to the peg and had no plans to alter the dinar’s value.

Bahrain lacks the ample oil and financial resources of its neighbours, and its state finances are among the weakest in the region. Domestic political opposition has slowed austerity plans designed to cut the government’s budget deficit.

The dinar also weakened in the one-year forwards market on Tuesday to its lowest since September 2016, while bond prices slid further and the cost of insuring Bahraini sovereign debt against default hit a record high, implying more than a 30 per cent chance of a default in the next five years.

Ehsan Khoman, regional strategist at Japanese bank MUFG, said the IMF’s warning as well as an agreement among global oil producers this month to boost output, which could pull down oil prices, had added to pressure on Bahrain’s currency.

“We are the whipping boy of the region,” said a Bahraini banker, noting that many international investors viewed Bahrain as the weakest link among the Gulf oil-exporting states.

Bankers said the dinar’s drop in the spot market did not necessarily mean the currency would remain under major pressure. As oil prices tumbled in early 2015, creating concern over the Saudi Arabian economy, the Saudi riyal also fell unusually far from its dollar peg.

Traders said at the time that Saudi authorities seemed temporarily taken aback by the pressure on the currency, but the riyal began to rebound within days as the central bank organised additional dollar supplies and warned banks not to speculate.

Nevertheless, a Western banker in the region said that in the immediate term, there might be little the Bahraini central bank could do to stabilise the markets.

“There appears to be hedge fund activity – they use FX as a proxy for the bonds,” he said. “There is no panic in the market, but there is tension.”

Many bankers said expectations that Saudi Arabia, and perhaps other regional allies of Bahrain, would eventually provide it with additional financial support were preventing worse instability in the markets.

Bahrain has been discussing for over a year the possibility of obtaining such aid from Saudi Arabia and other Gulf Cooperation Council countries, bankers and officials in the Gulf say, although government spokesmen have declined to comment.

The small size of the Bahraini economy would make it relatively easy for neighbouring states to bail it out, which could protect their own economies from the risk of contagion. Manama has projected a state budget gap of $3.5bn in 2018.

“Given that the track record of support has been strong in the past and Bahrain’s small nominal GDP size, expectations are that GCC support will continue,” said Khoman, noting that GCC states pledged $2.5bn of aid to Jordan earlier this month to help it weather an economic and political crisis.

But a regional banker said markets still needed to see efforts by Bahrain itself to bring its finances under control.

“The question is whether aid from other countries will be infinite or finite. How many times can it happen?” he said.