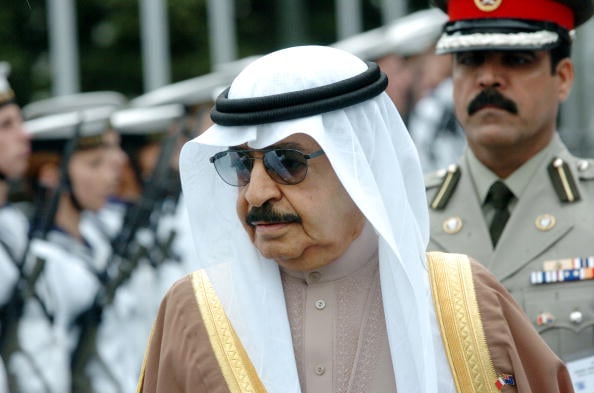 Bahrain’s prime minister said on Monday his government would “forcefully confront” protests called for later this week, and warned those behind planned demonstrations that they would be punished, state news agency BNA reported.

Protesters inspired by youth-led protests in Egypt that pushed the army to oust Islamist President Mohamed Mursi last month called for rallies on Wednesday, at a time of escalating clashes between police and pro-opposition demonstrators.

“The government will forcefully confront the suspicious calls to violate law and order and those who stand behind them through decisive measures,” BNA quoted Prime Minister Sheikh Khalifa bin Salman al-Khalifa as saying after a meeting to discuss preparations to confront the planned protests.

“It will punish (those) who stand behind them in line with the recommendations of the Bahrain National Council (parliament), which represents the will of the people of Bahrain,” he added.

Bahrain has banned protests in the capital Manama and toughened anti-terrorism laws, including imposing longer prison terms and stripping perpetrators of Bahraini nationality, which human rights groups said could lead to a crackdown on protesters.

August 14 marks the day in 1971 when Bahrain gained independence from Britain.

“Tamarrod” (rebel) is a loose grouping of opposition activists who came together in early July to push for a “free and democratic Bahrain” through mass anti-government demonstrations, according to social media, quoting the group.

Sunni Muslim-ruled Bahrain, which is home to the U.S. Fifth Fleet, crushed pro-democracy protests by majority Shi’ite Muslims in 2011.

But demonstrations continue to take place from time to time, often resulting in clashes between security forces and demonstrators.

The government and opposition groups have sought to discuss their differences in reconciliation talks launched in February, but the dialogue has yet to produce results.

Sheikh Khalifa on Saturday accused anti-government protesters of seeking to foment chaos and topple the government, and said Bahrain was being targeted in order to destabilise the Gulf – a possible reference to Iran, which Manama has accused of instigating the unrest.

Tehran has denied the accusations.

The opposition, mostly made up of members of the majority Shi’ite community, demands that the Sunni al-Khalifa ruling family introduces democracy in Bahrain, a close U.S. ally.

Many Shi’ites complain of discrimination in jobs and have been calling for a constitutional monarchy. The government denies discriminating against Shi’ites.