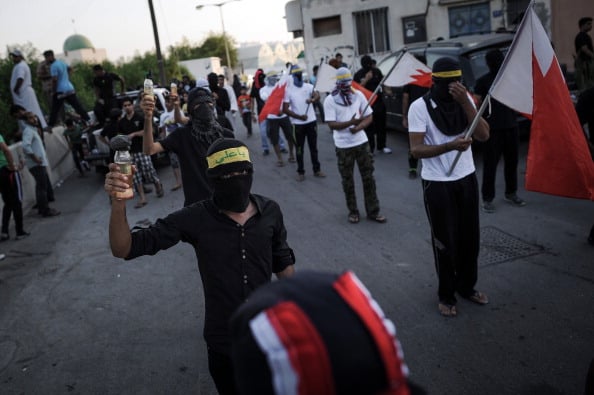 Bahrain has tightened security around restive Shi’ite Muslim villages in an effort to block anti-government protests planned for Wednesday by activists pressing the Sunni Muslim ruling family to allow democracy.

In statements disseminated on social media, the activists say they were inspired by mass protests in Egypt last month that prompted the army to oust Islamist President Mohamed Mursi.

But unlike in Egypt, where protesters were backed by the military, Bahrain’s security forces remain loyal to a government that on Monday vowed to “forcefully confront” demonstrators and prosecute those responsible for “incitement”.

The small Gulf Arab state and Western ally that hosts the U.S. Fifth Fleet has been buffeted by bouts of unrest since February 2011 when an uprising led by members of the Shi’ite majority demanded the al-Khalifa dynasty give up power.

The authorities crushed the revolt but protests and clashes have persisted despite continuing talks between government and opposition, leaving Bahrain on the front line of a tussle for regional influence between Shi’ite Iran and Sunni Saudi Arabia.

The protests called for Wednesday are symptomatic of rising tensions in the country. In contrast with previous protests, the pending rallies prompted the government to pass tough new laws banning demonstrations in the capital Manama.

Bahrain’s largest opposition group, the Islamist al Wefaq Society, said it was not planning to officially join protests although it supported the right to peaceful demonstrations.

“From what I have been hearing around, I know that it is going to be a peaceful movement but having said that I also expect clashes between the government forces and the protesters, because they are against all protests and demonstrations,” the Wefaq leader, Sheikh Ali Salman, told Reuters.

“I only pray that there are no victims.”

Wednesday will be the 42nd anniversary of Bahrain’s independence from Britain.

The concerted new push for a “free and democratic Bahrain” through mass protest is being driven by “Tamarrod” (Rebellion), a loose association of opposition activists who came together in early July, according to social media quoting the group.

A Reuters witness said he saw police reinforcements, including some armoured vehicles, being deployed on Tuesday night outside mainly Shi’ite villages such as Sanabis, Sitra and Budaya where protests have previously taken place.

“I don’t see where the problem is, why we are not allowed to ask for our demands and needs in peaceful demonstrations,” a 24-year-old secretary, who asked not to be named, said. “The more the government suppresses people, the angrier they will get.”

But a 34-year-old banker, who also asked for anonymity, said such protests are intimidating.

“The anti-government societies tried to scare us on February 14 of this year, using the social media to announce their plans and activities but thanks to the forces they were not able to do anything,” he said, referring to an earlier call for protests to mark the second anniversary of the 2011 uprising.

Complaining of discrimination against majority Shi’ites in areas such employment and public services, the opposition is demanding a constitutional monarchy with a government chosen from within a democratically elected parliament.

The Manama government denies any discrimination.

Prime Minister Sheikh Khalifa bin Salman al-Khalifa sternly warned activists on Monday that no protests would be tolerated and anyone inciting them would be prosecuted.

Signalling official concern, Bahrain’s chief of staff met the commander of the Peninsula Shield in Bahrain, a unit of a joint force set up by the six-member Gulf Cooperation Council (GCC) to combat foreign threats, state news agency BNA reported.

It said that on Monday, Sheikh Khalifa chaired a “high level meeting” of senior officials to discuss government preparations ahead of the protests.

He has also accused anti-government protesters of seeking to foment chaos and topple the government. He said Bahrain was being targeted in order to destabilise the oil-exporting Gulf – a possible allusion to Iran which Manama has accused of instigating the unrest. The Islamic Republic has denied this.