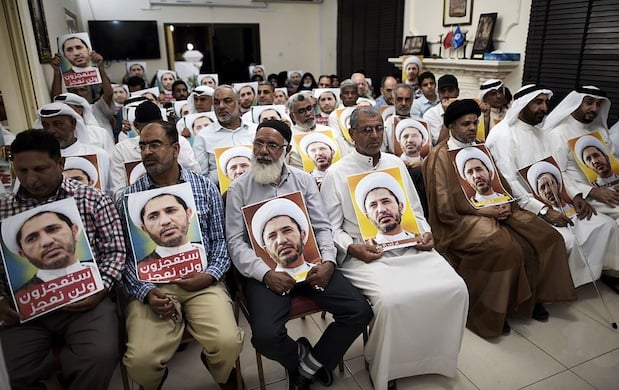 Bahrain on Monday dismissed as “unacceptable interference” U.S. and British criticism of its decision to dissolve the main Shi’ite Muslim opposition party, as senior clerics warned the Shi’ite majority was under threat.

The move against al-Wefaq was one of several steps taken by the Sunni-led government against its opponents that have drawn international criticism, including revoking the citizenship of the country’s Shi’ite spiritual leader Ayatollah Isa Qassim.

“Bahrain expresses its deep regret at the statements from the British foreign secretary and U.S. State Department and considers them as unacceptable interference in its internal affairs,” said BNA.

Bahrain said it wanted to take into account the interests of its allies and partners to preserve “distinctive and historical relations” with them.

The Gulf country has a Shi’ite majority but a Sunni Muslim-led government, mainly drawn from the ruling al-Khalifa family.

In a joint statement distributed on social media, Bahrain’s four main Shi’ite Muslim clerics warned that the government crackdown was not limited to the political opposition.

“We, the Shi’ites, as a main component of this homeland have become greatly convinced that we are being targeted in our existence, identity, beliefs, rituals and practices,” the statement, signed by Sheikh Abdullah al-Ghuraifi, Sheikh Abdul-Hussein al-Sitri, Sheikh Mohammed Saleh al-Rubaiyi as well as Qassim, said.

Bahrain’s justice ministry rejected the charges and vowed to keep up measures against what it said those who would try to divide the country on sectarian basis and finances terrorism.

“Everybody must support the measures taken by the state against those who violate the law, incite violence and are linked with forces abroad,” the ministry said in a statement.

Seen by other Sunni-ruled Gulf kingdoms like Saudi Arabia as a bulwark against Iranian influence, it put down Arab Spring protests in 2011.

The country has been gripped by political tension since 2011, with Shi’ites complaining of discrimination and demanding reforms that would give them a bigger say in government affairs.

Bahrain denies any discrimination and says a minority inspired by Iran are trying to foment sectarian unrest in the kingdom.