On Sunday, Bahrain’s National Taskforce for Combatting the Coronavirus said at a press conference that the country had recorded its second coronavirus death and that it was taking additional steps to combat the spread of the Covid-19 pandemic including the banning of public gatherings of more than 5 people.

The decision to introduce the new measures came on the same day the country reported that a 51-year-old Bahraini citizen who was evacuated from Iran, died as a result of the infection. The patient was believed to be suffering underlying and chronic health problems. 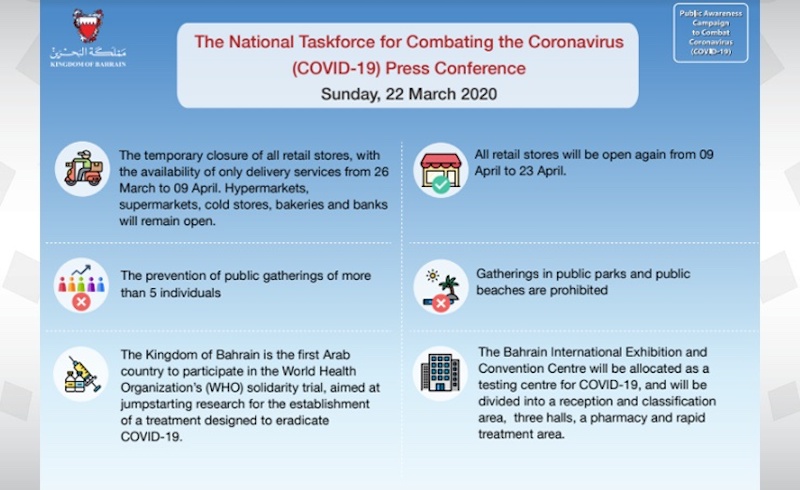 The punishments for any person who does not adhere to the measures outlined by the authorities to contain the spread of the pandemic includes imprisonment for a period of no less than three months and/or a fine of no less than one BD1,000 and not exceeding BD10,000.

Bahrain has confirmed that it has 183 active cases, three of which are critical. There have been a total of two deaths while 149 cases have been treated and discharged, and 250 individuals have left quarantines.

At the press conference the Minister of Health, Faeqa bint Saeed Al Saleh, outlined the following precautionary measures which would be implemented in Bahrain:

– The closure of retail stores does not extend to hypermarkets, supermarkets, cold stores, bakeries, pharmacies.

– All citizens and residents to remain at home as much as possible, and leave only for urgent matters if needed.

– Public gatherings of more than five people are prohibited, with action taken against those who violate this rule.

– Gatherings in public parks and public beaches will also be prohibited.