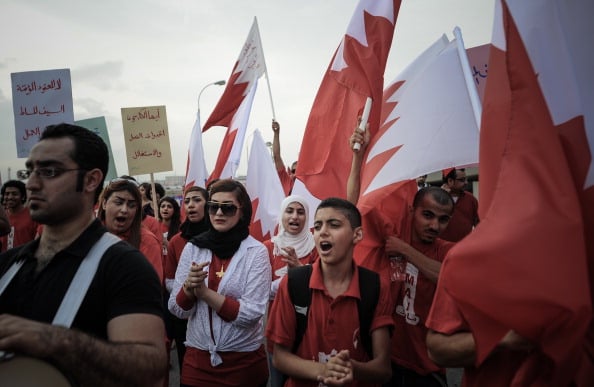 Bahrain’s prime minister accused anti-government protesters of seeking to foment chaos and topple the government on Saturday, days before planned pro-democracy protests in the tiny Gulf kingdom where unrest has persisted since early 2011.

Protesters inspired by the “Tamarrod” (rebel) protests in Egypt last month have called for rallies on Wednesday, at a time of escalating clashes between the police and pro-opposition demonstrators.

“Everybody has become aware that the truth behind what’s happening is not demands for a better life, but rather to change the regime and drag the country to chaos and ruin,” the official Bahrain News Agency quoted veteran prime minister Sheikh Khalifa bin Salman al-Khalifa as saying on Saturday.

The opposition, mostly made up of members of the majority Shi’ite Muslim community, demands the Sunni al-Khalifa ruling family introduce democracy in Bahrain, a close U.S. ally.

On Aug. 1, the government toughened the country’s anti-terrorism laws, including imposing longer prison terms and stripping perpetrators of Bahraini nationality, which human rights groups said could lead to a crackdown on protesters.

The new laws ban demonstrating in the capital, Manama, without permission from the security services and mandate jail for anyone who carries anything resembling explosives or firecrackers in a public place.

Sheikh Khalifa, speaking during an official visit to Muharraq Province, said Bahrain was being targeted in order to destabilise the Gulf, a possible reference to Iran, which Manama has accused of instigating the protests. Tehran has denied the accusations.

“The focus now is on Bahrain because it is the entrance to other countries in our region, and it is our duty to foil all these desperate attempts,” he said.