Bahrain and Oman have been identified as among the world’s “most vulnerable” oil exporters even as crude prices remain subdued, according to a new report.

The report by Bank of America Merrill Lynch (BoFA) found that many frontier markets remain highly vulnerable to oil price weakness as fixed exchange rates and lack of policy capacity has delayed the adjustment.

“The most vulnerable among the 68 economies we cover are Bahrain (largest fiscal deficit), Oman, Tunisia, Mozambique (widest current account gap) and Belarus,” the report stated.

Meanwhile, Russia was found to be the oil exporter with “the best fundamentals thanks to prudent fiscal policy in the good times and the frontloaded adjustment to the decline in crude prices during 2014-15”.

In the GCC, Kuwait was identified as the fundamentally strongest market. 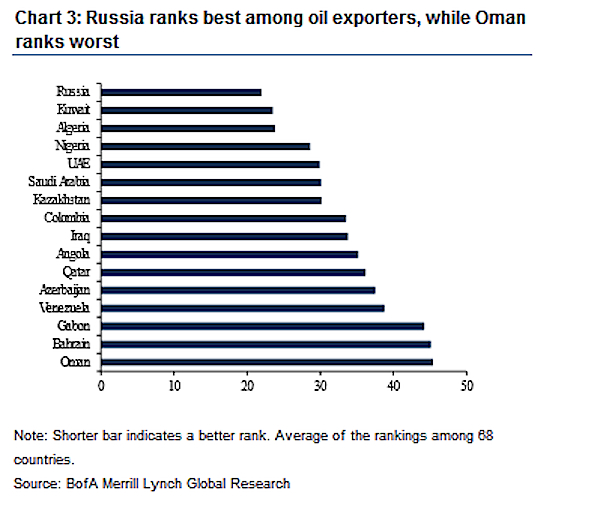 Market sentiment has remained negative because of additional supply in the market despite OPEC-led output cuts. The Organization of the Petroleum Exporting Countries and other producers extended the output cut deal for nine months in May.

But additional supply is not the only factor causing the dampening of prices, according to BoFA Merrill Lynch.

Oil demand growth has undershot expectations in the first half of this year, “removing support to oil prices just when the market needed it most”, the bank said in a report.

“While it is true that supply is largely to blame for lower oil prices, oil demand has failed to improve at the speed required to rebalance the global oil market,” said BoFA Merrill Lynch.

Some of the reasons for weak demand include transitory factors such as the Indian currency demonetisation, the Mexican energy reform, the sharp cyclical downturn in Brazil and Russia and a warm winter in the US.

“The demand weakness has now also spread to other regions like Europe, China, Korea and parts of the Middle East. Even the US is not managing to shake off a bout of demand weakness. This suggests that cyclical, rather than solely transient, factors are perhaps also at play here,” the report said.

From a macro perspective, economic activity in most places is either moving sideways or already turning south.

Most importantly, the slowdown in China has already led to softening of electricity generation and steel and cement production.

“Retail sales are moderating while auto sales are slowing drastically, suggesting some spillover to the consumer has already taken place. We increasingly worry that China could overshoot on credit tightening, creating downside risks to GDP growth as well as downside risks to raw material imports,” BoFA said.

“Reduced loan growth may withdraw support for oil demand and many other commodities, too,” it added.

The outlook remains for oil demand remains subdued for this year and the next.

“Looking into the second half of 2017, we now doubt that demand growth will accelerate sufficiently and see downside risks to our forecasts of 1.3 million bpd in both H2 and 2018. In the absence of a mirroring supply response, softer consumption could push 2018 balances into surplus.

“Put differently, demand will not break the current downward price momentum for now,” the report said.