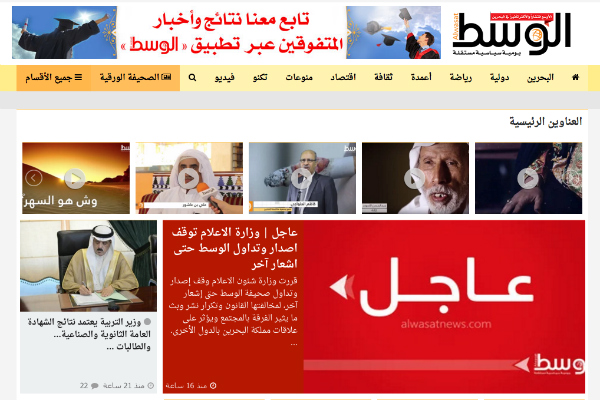 Bahrain on Sunday suspended the country’s only independent newspaper indefinitely over a column that insulted a “sisterly Arab country”, state news agency BNA reported, the second time the publication has been banned this year.

Al-Wasat’s editor described the decision as “harsh and shocking” but said he hoped to try to reverse the measure.

The move coincides with a crackdown by the Sunni-led government on the opposition that has included shutting down main political groups and targeting activists. Al-Wasat, while an independent newspaper, is seen as supporting the views of the opposition.

BNA said the Information Ministry decided to stop al-Wasat from being printed or circulated until further notice for “repeating the publication of …that which spreads divisions in society and affects the Kingdom of Bahrain (vis a vis) other countries.”

It said the decision came over a column published on Sunday which it said contained insults to an Arab country, but it did not say which one or give further details.

The editor, Mansour al-Jamri, said authorities verbally informed the newspaper that the decision was over a column it published about protests in Morocco.

“This is a harsh and shocking measure,” said Mansour al-Jamri. “We are an independent newspaper, we publish stories covering both points of views,” he added.

Jamri said the newspaper was shut down four times since 2011. The last time was in January, when authorities closed down the online edition.

In the past, “we would be in touch with the ministry and work things out,” he said.

Western-allied Bahrain, where the US Fifth Fleet is based, crushed mass protests by the Shi’ite majority in 2011.

Al-Wasat, founded by private investors in 2002, was briefly closed in 2015 and the government cited similar reasons then. It was also briefly shut in 2011 following anti-government protests and its senior staff were removed and prosecuted.

Jamri was one of three senior editors who was tried on charges of fabricating news when the paper reported the protests, led by the Shi’ites against the government of the Sunni Muslim ruling family.