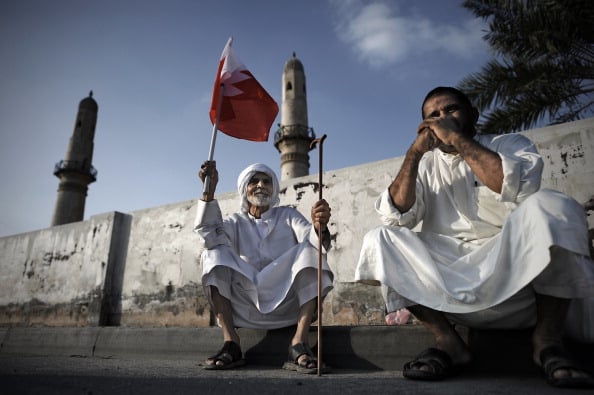 Efforts to reconcile the government and opposition groups seeking reform seem ever more hostage to hardliners on both sides, diplomats and analysts say.

Many wonder where the climate of recrimination will lead in Baharain, base to the U.S. Fifth Fleet.

“The worst scenario is that the crackdown by the authorities will increase and the violent reaction to this crackdown will also increase,” said Sheikh Ali Salman, a Shi’ite cleric and head of the main opposition al-Wefaq group, which advocates non-violence.

Last Monday, the government said it had foiled an attempt to smuggle explosives and arms, some made in Iran and Syria, into the country by boat. It complained of “plans to carry out terrorist acts”.

In government circles, responsibility for security flare-ups is placed squarely with the opposition. Information Minister Sameera Rajab said of al-Wefaq: “We don’t trust them. They have to work hard to get the trust back.”

The strategically vital island has been hit by unrest since large pro-democracy protests in early 2011, becoming a front line in a region-wide tussle for influence between Shi’ite Muslim Iran and Sunni Arab states such as Saudi Arabia.

A resumption of the big protests of early 2011 appears unlikely, with Bahrainis apparently weary of political crisis.

Yet hopes for a breakthrough now seem feeble.

Adel al-Asomi, a member of parliament who is critical of Shi’ite oppposition groups, said: “Bahrain is a small country that cannot take more. It has been three years of terrorist acts and unplanned steps by the opposition.”

“I hope there is a solution, but until now there are no indications that there can be any solution soon.”

CYCLE OF CLASHES AND CLAMPDOWN

The country’s worst turmoil since the 1990s quickly changed from peaceful demonstrations to an attritional cycle of clashes between mostly Shi’ite protesters and mainly Sunni security forces in which dozens have died, including some policemen.

The violence has added new layers of grievance to the original dispute, in which the opposition accused the ruling family of manipulating sectarian divisions to avoid democracy, while the government charged Wefaq of working for Iran.

Hardliners in both camps, the Saudi-backed ruling family and the mainly Shi’ite opposition, are gaining ground, complicating efforts to end the cycle of protest and clampdown.

A year ago hopes for a breakthrough rose when Crown Prince Salman, seen by some opposition figures as a more moderate figure within the Al Khalifa ruling family, called for a renewal of political talks abandoned in 2011.

While the two sides remained apart on many big issues, the talks began and some sort of deal appeared possible.

Then, on July 17, a car bomb exploded in a carpark outside the Sheikh Isa bin Salman Sunni mosque in Riffa, an area where many members of the ruling family and armed forces live.

There were no casualties. But the blast undermined the Crown Prince’s efforts to push political and economic reforms, instead strengthening hawks inside the Al Khalifa family who see Shi’ite protests as a threat.

“The Crown Prince was hunkered down. He has to be seen to be tough,” said one Western diplomat.

“Since then it has been hard going.”

Days after the bombing, parliament held an extraordinary session and agreed to strip of their nationality anyone who commits, or calls for, “terrorist crimes”, while the king decreed additional tough new penalties for such offences.

The amendments prescribe a jail sentence on anyone who carries out or attempts a bombing attack. Anyone who puts or carries anything that resembles explosives or firecrackers in public places will also receive prison terms.

Protests in Manama were banned and weeks later the government barred opposition members from meeting foreign diplomats without official approval.

DEAL OR NO DEAL

When a senior Wefaq official and former lawmaker, Khalil al-Marzouq, was arrested in September and put on trial for inciting terrorism, the opposition pulled out of the talks.

The arrest of Marzouq, followed by the charging of Sheikh Salman with insulting the Interior Ministry and “spreading lies” capable of jeopardising national security, marked a turning point in government rhetoric towards Wefaq.

However, by clamping down on the main opposition group, the government risks losing its only credible negotiating partner, said Jane Kinninmont of the British thinktank Chatham House.

“There are other influential opposition leaders, some of whom have more influence on the regular street protesters, but the government has so far been unwilling to talk to figures who have tougher demands than Wefaq,” she said.

Despite the pessimism, however, a number of insiders still speculate that a deal may be possible.

The specifics of such an agreement remain unclear.

In one scenario suggested by analyst Coline Schep from Control Risks, the government could attempt to offer Wefaq junior ministerial posts or changes to electoral districts, which the opposition says underrepresent Shi’ites.

In return, it might ask Wefaq to end its boycott of parliamentary elections, started in 2011, and halt street violence, which Schep believes it has only limited power to do if no deep reforms addressing Shi’ites’ grievances were made.

A former U.S. official said he believed Bahrain’s rulers were ready to offer the opposition a deal.

“The opposition can’t get their act together. They are not interested in a compromise. They’ve had chances that they failed to seize,” said the former official.

However, the ruling family has shown no willingness to yield to Wefaq’s bottom-line demands that parliament be given full powers to legislate and form parliaments.

The elected assembly’s powers to legislate are neutralised by an appointed chamber and the monarchy dominates the cabinet – headed by the same Al Khalifa prime minister since 1971.