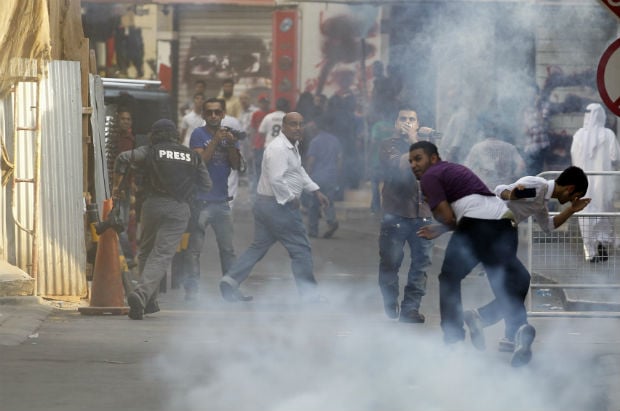 Bahrain has defended its use of teargas after rights groups criticised the Gulf Kingdom’s reported plans to buy 1.6 million canisters of the material.

Local and international rights groups have accused the authorities of using teargas excessively and of firing canisters directly at protesters or into cars and houses where they can cause serious injuries.

“Teargas is non-lethal and it is used appropriately by the police, in compliance with the law and in full adherence with the internationally accepted standards contained in the Bahrain police code of conduct,” the government spokesman’s office said in an email to Reuters.

The tiny island state has been in political upheaval since February 2011, when mass protests led by the mostly Shi’ite Muslim opposition were crushed by the Sunni monarchy.

The government statement was made in response to a Reuters query about a leaked document published by Bahrain Watch, an advocacy group, which appeared to be a tender to supply the Interior Ministry with teargas canisters and stun grenades.

The U.S. government has banned the export of teargas to Bahrain.

It did not specifically address the issue of the reported teargas tender, but did say that protesters’ practices of setting fire to car tyres and throwing petrol bombs were more dangerous than the authorities’ use of teargas.

It said more than 2,300 police personnel had been injured and nine killed since the protests began 2-1/2 years ago.

An international inquiry in November 2011 found that 35 people had died during Bahrain’s uprising, most of whom were protesters but also including five security personnel. The opposition puts the death toll at more than 80.

According to Bahrain Watch, the leaked document came in the form of a tender issued by the Interior Ministry’s Purchasing Directorate. It invited arms manufacturers to supply the ministry with “teargas cartridges and sound grenades.”

In March 2012, the UN High Commissioner for Human Rights said the use of teargas had led to a number of deaths of protesters and bystanders in Bahrain.

Physicians for Human Rights (PHR), a U.S.-based group that campaigns for medical staff working in crisis zones, said in August 2012 that the Bahraini government used teargas indiscriminately, causing severe injuries to some civilians.

Bahrain has denied that charge.