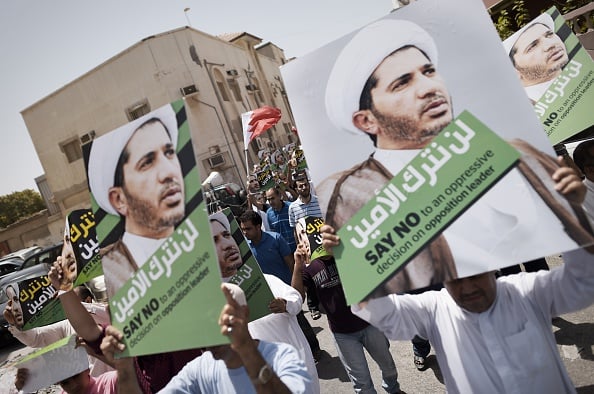 Salman, who leads the now closed al-Wefaq Islamic Society, was granted a retrial for inciting unrest “crimes of promoting change to the political system by force” in October for unspecified reasons.

He has been in custody since his conviction last June.

An administrative court ordered Wefaq itself closed in June and Bahrain’s foremost Shi’ite cleric Sheikh Isa Qassim was convicted of money-laundering and stripped of his citizenship.

The independent Bahraini newspaper al-Wasat said the appeals court, in a new ruling after the court of cassation ordered a retrial, reported the verdict in Salman’s appeal.

“Sheikh Ali Salman is a prisoner of conscience. He has been put behind bars merely for peacefully reaffirming his party’s determination to pursue power in Bahrain, to achieve the reform demands of the 2011 uprising and to hold those responsible for human rights violations to account,” the London-based group said in a statement.

“Instead of punishing him for peaceful criticism the Bahraini authorities must order his immediate and unconditional release.”

Bahrain’s Shi’ite majority complains of discrimination by the Sunni-led government. The authorities deny this and accuse the opposition of undermining security in the island which hosts the U.S. Fifth Fleet.

Since the authorities crushed “Arab Spring” protests in 2011, demonstrators have clashed frequently with security forces, who have been targeted by several deadly bomb attacks.

Majority Bahraini Shi’ites say the Sunni Muslim-dominated government discriminates against them, while authorities deny that and say opposition politicians are trying to undermine security.