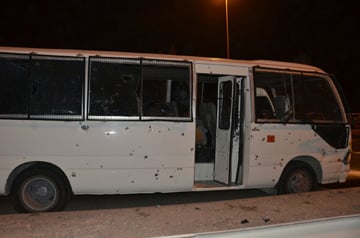 Bahrain’s Ministry of Interior has announced the death of one policeman and injuries to eight others following an attack on a police bus on Friday.

In a statement to Bahrain News Agency, the ministry said the attacked occurred at 5:26pm as the bus was “driving on Shaikh Khalifa bin Salman highway towards Manama near Jidhafs”.

A “group of terrorists” targeted the bus with a remotely detonated homemade bomb, leading to the death of one officer and serious and medium injuries to the others, the ministry said.

An image of the aftermath of the attack showed shrapnel holes throughout the vehicle.

Authorities are now investigating the incident and legal proceedings have begun, the ministry added.

Other Gulf states including the UAE quickly condemned the attack.

“The UAE reiterates its full support to the Kingdom of Bahrain and its steadfastness in confronting these grave crimes,” the UAE’s Ministry of Foreign Affairs and International Cooperation said.

The attack comes less than a month after five policeman were injured in a blast to the west of the capital Manama.

Bahrain has suffered from a series of attacks on policemen and security forces this year by Shia militants the government claims are backed by Iran.

In June, one policeman was killed and two others were wounded in a blast in the Diraz home village of the Shia Muslim spiritual leader in the country Ayatollah Isa Qassim.