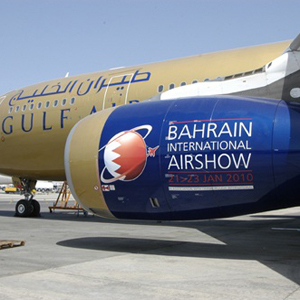 The second Bahrain Air Show has been deemed such a success that expansion plans are already underway for the 2014 show. The event attracted 60,000 visitors, 37 major aviation companies including Airbus, Boeing, Bombardier, Gulf Air, Lockheed and General Electric, as well as 45 official delegations from 35 countries. $930 million worth of business deals were signed according to Civi Aviation Affairs.

“We are happy that despite the difficult times we have had in the last year, we have been able to host a very successful show,” Civil Aviation Affairs Under-Secretary Captain Abdulrahman Al Gaoud said. “Everyone who has taken part is happy.”

Captain Al Gaoud, who is also a member of the show’s Supreme Organising Committee, revealed plans to increase the size of the event by at least 50 per cent for the 2014 edition and that the airshow had been a huge boost for the local economy.

The Bahrain economy lost an estimated $391 million last year, or 2.77 per cent of GDP, as unrest caused the cancellation of events such as the 2011 Bahrain Grand Prix . However, the ratings agency Moody’s reported that Bahrain maintained a two per cent GDP growth in 2011 and forecast three per cent in 2012 – rates that many European countries would be proud of.