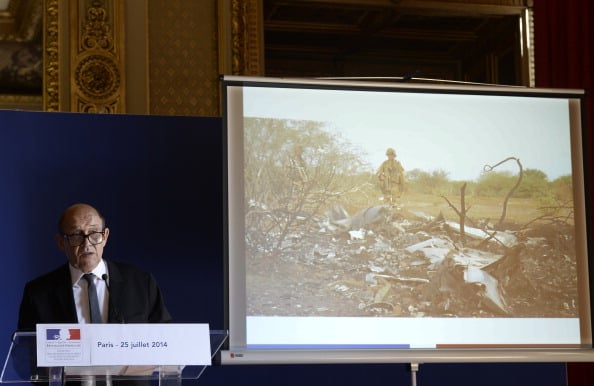 Poor weather was the most likely cause of the crash of an Air Algerie flight in the West African state of Mali that killed all 118 people on board, French officials said on Friday.

Investigators at the scene of the crash in northern Mali concluded the McDonnell Douglas MD-83 aircraft broke apart when it smashed into the ground early on Thursday morning, the officials said, suggesting this meant it was unlikely to have been the victim of an attack.

“French soldiers who are on the ground have started the first investigations,” French President Francois Hollande told reporters. “Sadly, there are no survivors.”

The death toll, initially announced as 116, was revised up to 118 after a final passenger manifest was issued. An earlier count of 51 French nationals among the dead was also raised to 54 by the French Foreign Ministry to include those with dual nationality.

French, Malian and Dutch soldiers from a U.N. peacekeeping force (MINUSMA) secured the crash site, which lies about 80 km (50 miles) south of the northern Malian town of Gossi near the Burkina Faso border.

France sent troops to Mali last year to halt an al Qaeda-backed insurgency and has about 1,600 soldiers based in Mali, mostly in the northern city of Gao. French officials said there were no signs of insurgent activity in the area of the crash.

Malian authorities said they were opening an international inquiry into flight AH5017, which crashed less than an hour after it left the Burkinabe capital Ouagadougou en route for Algiers. Aviation authorities lost contact with the flight at around 0155 GMT on Thursday, shortly after the pilot requested to change course due to a storm.

Hollande said one of the black box flight recorders had been recovered and would be analysed.

“The plane’s debris is concentrated in a small area but it is too early to draw conclusions,” he said. “There are theories, especially the weather, but I’m not excluding any theory.”

French Foreign Minister Laurent Fabius said the crash site covered an area of about 300 metres by 300 metres and was an arduous six-hour drive from Gossi, making it difficult for forensic teams to reach it.

Fabius said bodies would first be taken to Gao before being repatriated “as quickly as possible”.

Alidou Ouedraogo, whose daughter was among the 27 citizens of Burkina Faso killed in the crash, said: “They have to do everything to reassemble the bodies and bring them home so that we can mourn properly.”

International police agency Interpol said it was deploying a team to help identify the victims, who came from 15 different countries.

Another plane crash is likely to add to nerves over flying a week after a Malaysia Airlines plane was downed over Ukraine, and after a TransAsia Airways plane crashed off Taiwan during a thunderstorm on Wednesday.

“We’re not even sure that we can piece together the bodies they have been so badly destroyed,” Burkina Faso Prime Minister Luc Adolphe Tiao told a news conference in Ouagadougou.

A local official in the town of Gossi told Reuters on Thursday that local herders, who said they saw the plane crash, told him it was in flames before it hit the ground.

French Interior Minister Bernard Cazeneuve said the plane was destroyed only on impact and said poor weather was the likeliest cause.

Transport Minister Frederic Cuvillier said the strong smell of aircraft fuel at the crash site and that small radius of the crash site suggested the cause of the crash was linked to weather, a technical problem or a cumulation of both.

“We exclude – and have done so from the start – any ground strike,” Cuvillier told France 2 television.