Residential rents and property sales prices fell on average across Sharjah and Ajman during the first half of the year, according to a report issued by online platform dubizzle Property.

Rents in some areas such as Al Nahda in Sharjah fell by up to 20 per cent year-on-year for certain units, with the average cost for a two-bed apartment now standing at Dhs36,000 – down from Dhs45,000 last year, the report found.

Overall, Al Nahda and Al Khan experienced the biggest drops in average rents (down 16 per cent compared to H1 2017), followed by Al Taawun (14 per cent) and Muwailih Commercial (2 per cent).

Looking at apartment sales prices in Sharjah, the emirate’s popular Al Khan area saw a slight increase in rates – up by 4 per cent year-on-year in H1. However, other key areas experienced a drop in prices, the report said.

Sales prices in Al Majaz fell by 19 per cent, in Al Nahda by 9 per cent, and in Al Taawun by 4 per cent.

Overall, Al Nahda, Muwailih Commercial and Al Taawun were the most popular areas for both sales and renting on dubizzle Property. 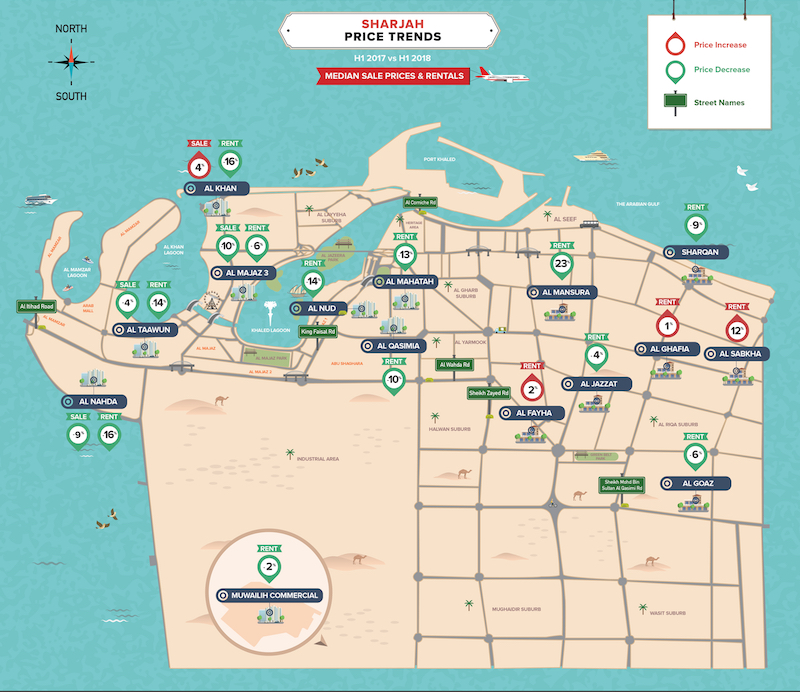 Ajman also witnessed a similar decline in both rentals and sales prices during the first half of the year, the report found.

Apartment rentals across the emirate decreased, with Al Jurf and Ajman industrial area posting the largest drop at 18 per cent year-on-year.

This was followed by Al Sawan with a 14 per cent decrease in rents, and Emirates City, where prices fell by 10 per cent.

In terms of apartment sales prices, Al Nuaimiya saw the largest drop in rates at 23 per cent, followed by Emirates City (21 per cent), Al Mushairef (19 per cent) and Al Sawan (10 per cent).

Villa rates for both sales and rents in Ajman also “significantly” declined in H1.

Overall, the most searched areas for both sales and rents among dubizzle Property users in Ajman were Emirates City, Al Nuaimiya, and Al Sawan.

“Across the UAE, properties are becoming more affordable resulting in a decline in cost of living,” said Samer Abdin, general manager at dubizzle Property.

“We are seeing an oversupply of property units in the market right now which has created a more competitive and affordable market. Our data highlights that apartment sales prices in Ajman in particular have fallen at a more pronounced rate than rental prices, giving property seekers an excellent opportunity to invest in their own property,” he added.