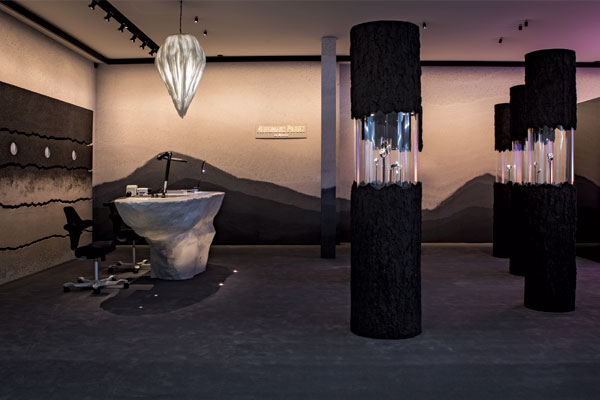 Swiss watchmaker Audemars Piguet’s foray into the art world was happenstance rather than intentional.

Back in 2012, as Olivier Audemars – the great-grandson of the company’s co-founder Edward Auguste Piguet – tells us during a meeting at the 2019 Art Basel, the company was getting ready to celebrate the 40th anniversary of the iconic Royal Oak.

Of the many activations planned, one of them was to include an art project. Not much thought was put its way, until British photographer Dan Holdsworth was asked to come down to the Vallée de Joux – where AP has been headquartered since its inception in 1875 – to photograph the region.

Holdsworth used hours-long exposures and focused on the harsh natural geological formations of the region.

“We were shocked by the results. The images of the rocks, ice and the fog showed us a place we thought we knew. It’s then that we realised that artists have the ability to see things from a different angle,” says Audemars.

It was that realisation that sparked a wider conversation about the role of art in Audemars Piguet, and led to the watchmaker becoming the official Associate Partner for Art Basel in 2013, a position it has occupied ever since.

As part of that association, AP sets up a lounge within the VIP Collector’s area of the art fair that travels to Hong Kong, Basel and Miami every year. In 2013, it was Holdsworth’s images that were exhibited in the lounge.

By the following year, AP realised that it needed to establish a division within the company that curated art projects like that at Art Basel.

“Every year they invite a guest curator who comes to the Vallée de Joux, spends some time there and then pre-selectx three to five artists. We try to find artists that are interested in things like complexity, precision and nature. Those artists will also come to the Vallée de Joux and work on a project. They will then make their proposals and we will select one of those proposals.”

One artist works on the design of the lounge, while the other works on the art contained within it, both of whom are mentored by AP’s rotating guest curator.

“We try to limit the company’s direct involvement in the project to make sure that the project is feasible in terms of finance and time. But we don’t tell the artists what to do,” says Audemars.

The results have led to several stunning multi-disciplinary artworks exhibited at Art Basel. In 2015, the first commission by the newly formed division was a work titled Synchronicity by Robin Meier, which comprised of an air-locked tent filled with ruby glow lights, dozens of crickets and thousands of live fireflies flown from Japan to Switzerland in a demonstration of how fireflies can seamlessly synchronise their movements and actions.

Other exceptional artworks include a bi-level verdant installation which included pneumatically levitating sculptures by performance artist Lars Jan that was exhibited at the Miami Beach outing of Art Basel.

One of the most intricate works so far though was by Beijing multimedia artist Sun Xun who exhibited his work, entitled Reconstruction of the Universe, three years ago also at the Miami Beach edition of Art Basel. He engaged hundreds of assistants to transfer more than 10,000 paintings onto hand-cut woodblock prints that were then filmed at 18 frames per second to create a 3D stop-animation work titled “Time Spy”.

Another key area that AP has invited artists to collaborate on is the lounge design itself. In 2014 and 2015 French artist Mathieu Lehanneur created a lounge concept entitled Mineral Lab I and II, in which glass cubes and even an eco-living wall were part of the setup.

From 2016 through to 2018, AP worked with New York-based artist Sebastian ErraZuriz to create varied designs for its lounge, including the most recent one last year which was themed on iron ore that is used to make steel and plays a central role in watchmaking. The installation involved suspending hundreds of 3D-printed rocks from the ceiling.

For 2019, Audemars Piguet announced a two-year partnership with Brooklyn-based artist Fernando Mastrangelo for its lounge design. The lounge concept called Vallée was first unveiled at Art Basel Hong Kong earlier this year and then made its way to Basel in June, where we caught a glimpse of it.

“It starts in the forests with the trees,” says Mastrangelo pointing to the sand and silica moulded barks of spruce trees that contain glass-cases within them and whose girth represents the age of the watches inside it.

A vintage selection of watches, including the stunning asymmetrical watch from 1962, is placed in a bark that is wider, while the newest addition to the AP collection – the Code 11.59 that made its debut earlier this year – is showcased in a narrower bark.

The watchmaker’s desk within the lounge, which resembles a rock formation, is cast in resin and cement and based on rock formations that Mastrangelo witnessed when he travelled to the valley at the time of being commissioned to undertake the project.

“The chandelier above the table is made from crushed glass and resembles a stalactite. The whole project has been going on a year, but the fabrication took around six months,” says Mastrangelo who shot into the limelight when Facebook co-founder billionaire Sean Parker asked him to create a one-off art installation in his West Village townhouse back in 2012.

That commission, which was completed in 2014, resulted in Mastrangelo becoming a much sought–after artist.

“It took me 10 years [of being an artist] to get to that [Sean Parker] commission. Up until then, I was selling one piece to the next. That was the moment everything started to sell. I took the money from my installation and started a furniture line that I presented from a context of design and not art. Stella McCartney saw the work, Dior began to buy from me, everything just blew up.”

Back to the lounge at Art Basel and Mastrangelo shows us what he calls the strata wall – built from sand, salt, silica and limestone – located just behind the watchmaker’s desk. Within the different coloured strata wall are five materials central to watchmaking and the region encased in glass – gold, brass, sapphire glass, iron and aventurine. The last material is of particular significance because of its relevance to the new $71,000 Code 11.59 Perpetual Calendar timepiece that had a trunk to itself within the lounge.

The final part of the lounge included a section called Escape Lounge ,where Mastrangelo used a large curved LED screen where each lobe has a different key to it, programmed to display the sunrise and sunset in the valley using gradient colours based on an actual video of the phenomenon shot in the valley using drones.

“It also references art history. There’s a little of James Turrell and Rothko feel to it – or at least my interpretation of it.”

The lounge is also where AP introduced the work of this year’s commissioned artist, Jana Winderen, whose sonic installation is titled Du Petit Risoud Aux Profoundeurs Du Lac De Joux. The Norwegian artist used sophisticated microphones, hydrophones and ultrasound detectors to capture sounds up in the mountains and below the lake to demonstrate the sonic universe of the valley.

“Jana is a marine biologist and is very interested in the impact of human activity on marine life. We asked her to come to Vallée de Joux and record some sounds. We’ve had other artists working on capturing the sounds in the valley, but none of them could filter out the noise pollution as Jana did,” explains Audemars.

Those sounds which include a mix of water running, marine animals making noises at frequencies that can’t be captured by human ears unless digitally amplified. Ambient noises of trains, airplanes and raw sounds generated by nature itself in the Risoud forest can be experienced by way of headphones in the Escape Lounge where visitors can sit and view images of the sunrise/sunset in the valley accompanied by the sounds of Winderen’s recordings.

She also had an extended listening of some of those sounds during a performance at the HeK, the House of Electronic Arts, in Basel.

Audemars Piguet has used Art Basel as a stage to demonstrate its association and commitment to the arts, and it’s a process that is being taken forward through other initiatives like its recently announced partnership with the Montreaux Jazz Festival, and a special collaboration with Japanese electronic composer and visual artist Ryoji Ikeda who is showcasing his work at this year’s Venice Biennale.

Rather than AP influencing the art world, Audemars would prefer it to be the other way around.

“The art projects make us perceive things differently and discover a side of our origin that we hadn’t thought about. The big challenge today is to immerse as many people from our company into the artwork to maximise the chances that something somehow might happen. You never know if it would and it’s not important if it does, but you at least increase the probability that it could. It can even be a janitor in the company who decides to do something differently.”