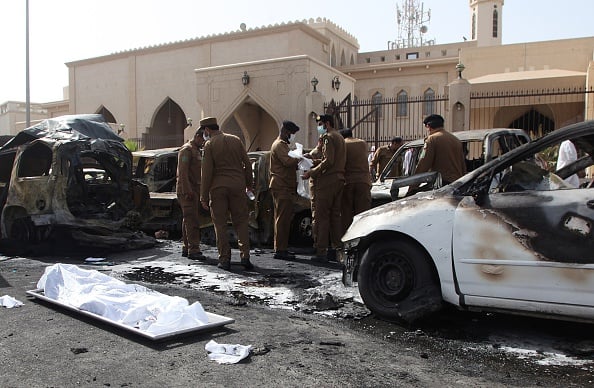 The two blasts killed 25 people, stirring divisions in a kingdom dominated by the ruling Al Saud family and a majority Sunni population that makes up its support base and includes clerics from the strict Wahhabi school who often say Shi’ites are not true Muslims.

The attacks throw the royal family’s commitment to diversity into the spotlight just as animosity towards the minority rises along with tensions between Saudi Arabia and regional arch rival Shi’ite Iran, and as the world’s top oil exporter presses on with a war on fighters of a Shi’ite offshoot in Yemen.

While thanking the government for its support and publicly declaring confidence in the police many Shi’ites privately said they feared little would be done to address underlying sectarian problems that they blamed for the violence.

“People are focusing on the sectarian issues. The newspapers, social media, the education books,” said a Shi’ite activist, who is often critical of the government’s handling of sectarianism and declined to be named, by telephone.

Since the attacks, the government allowed Shi’ites to set up community protection groups to search people entering mosques and set up checkpoints to monitor entrances to villages. They are unarmed but phone police if suspicious strangers approach.

At a funeral on Wednesday for the victims of Friday’s Dammam mosque blast, about 10,000 people gathered to wave black mourning flags, pray and walk with the bodies and those entering were patted down at checkpoints four times in 300 metres.

Militant Sunni rhetoric in Saudi Arabia paints Shi’ites as loyal to Iran instead of their own government, and some Shi’ites have accused the authorities of instigating public crackdowns at moments of regional tension, which Riyadh also denies.

IS, which has called on Saudi volunteers to avoid travelling to Iraq or Syria and instead attack Shi’ites at home, has drawn on a well of public anger at the minority sect’s perceived attacks on the majority’s fellow Sunnis across the Middle East.

“All humanity here is under one king and we are all secure,” said Ibrahim, who gave no surname but identified himself by the nickname Abu Ahmed and spoke to foreign reporters inside the al-Anoud mosque on behalf of its congregation.

The mosque, carpeted in red, with a dome inset with stained glass, and lit by glass chandeliers, covers an area the size of several tennis courts to fit the roughly 6,000 worshippers.

Unlike in Sunni areas, where every small neighbourhood is served by a mosque, al-Anoud district contains the only Shi’ite place of worship the government has permitted in Dammam, and members of the congregation have to travel from miles around.

For other rites the sect uses a special type of prayer hall known as a Hosseiniyeh, but none of these are permitted in Dammam, a mostly Sunni city, and are limited to the nearby mainly Shi’ite district of Qatif.

After Friday’s attack, local authorities finally told Dammam’s Shi’ites they could have a dedicated graveyard after a decade of requests, one of a number of gestures seemingly aimed at soothing local anger.

Those gestures, which also included generous pledges of compensation to families of the bombing victims and condolence visits by royal princes, were echoed by many Saudis on social media who denounced both the attacks and anti-Shi’ite feeling.

But Shi’ite activists, speaking to Reuters by telephone, said they remembered similar expressions of unity after IS sympathisers attacked a Hosseiniyeh in the al-Ahsa region in November, shooting dead eight people.

That attack did nothing to stop an outpouring of anti-Shi’ite criticism on social media in the following months, and appeared to produce no wider introspection into religious discrimination or hatred in the kingdom, they said.

Behind the al-Anoud mosque, by a back entrance, a charred patch of tarmac shows where a young suicide bomber dressed as a woman detonated his bomb.

He had been stopped from entering by two young men, suspicious that the bomber, wearing a long black abaya, was not using the women’s entrance. They were killed by the blast.

Hassan al-Hashem, an 18-year-old school student, was shielded from the explosion by a pillar, but his 34-year-old cousin, schoolteacher Seyyid Abdulhadi al-Hashem, was killed.

He now volunteers to frisk people at the entrance to the mosque, and like others says he is prepared to take the risk of confronting a jihadist to protect his community.

“People want to be like Abduljalil (his cousin). They are hoping to die to save the people,” said Mustafa al-Shawaf, 25.

To some Saudi Sunnis, reports of Shi’ites mobilising to protect their communities, even though they are not armed and have cooperated with police, have been seen as a threat.

It showed the fine line that the authorities must walk between assuaging local fears of insecurity in the face of militant attacks and anger among some Sunnis at what they see as preferential treatment of a minority they despise.

What many Shi’ites at Wednesday’s funeral for Friday’s bomb victims said was the long-term answer is a law against religious hatred, something that the country’s appointed Shura Council has said it might discuss.

“Some people from the Shia will be accused and some Wahhabis will also be punished by the law. But we need this law. To remove all the hate speech here between Shia and Sunna. This is our target,” said Waleed Sulais of the Adala Centre.

But in a country whose ruling dynasty depends for some legitimacy on a Wahhabi clergy that insists upon supremacy in matters of faith, such a law could be a long way off.