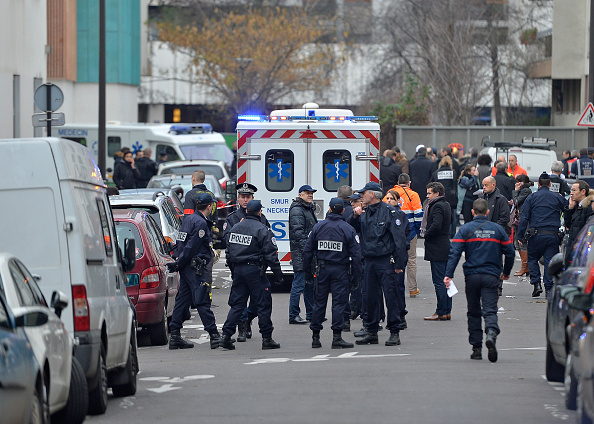 While police have yet to catch or identify the attackers or explain their motives, amateur video shows at least one shouting “Allahu Akbar”, Arabic for “God is Greatest”, after the attack and saying they had “avenged the Prophet Mohammad”.

A witness inside the building told French media that one attacker had identified himself to her as a member of al Qaeda.

Terrorism experts said the hooded gunmen, who wore matching jumpsuits with ammunition belts and carried Kalashnikov assault rifles, appeared to have carried out their attack methodically.

“I was struck not only by their cold-blooded calm but also the professional way that they made their getaway, taking the time to finish off a wounded policeman,” said Jean-Louis Bruguiere, a former top anti-terrorism investigative magistrate.

Charlie Hebdo’s office had been under police protection since it was firebombed in 2011 after publishing drawings mocking the Prophet Mohammad.

“Clearly there was a reconnaissance operation beforehand,” Anne Giudicelli, founder of the TERR(o)RISC security consultancy told Reuters. “They found a chink in the security arrangement and chose a method guaranteeing success.”

Islamist groups have posted videos in recent weeks warning France of imminent attacks over its participation in the U.S.-led bombing campaign against Islamic State militants in Iraq.

The attack began shortly after 11.30 a.m. (1030 GMT) when two gunmen forced their way into the building in eastern Paris. They shot a technician at the reception desk, then opened fire on journalists gathered for a weekly news planning meeting, witnesses said.

The men accosted illustrator Corinne Rey on the ground floor, ordering her to enter a code to open the door to Charlie Hebdo’s office. “They said they belonged to al Qaeda,” Rey said, adding they had spoken in clear French.

In an attack lasting about five minutes the gunmen – who also carried a pump-action shotgun, according to a police trade union official – shot dead a police officer posted inside the office as well as eight journalists.

The victims included three cartoonists well known by their pen-names of Cabu, Wolinski and Charb, who was the publication’s editor. Economist Bernard Maris, a columnist, was one of two visitors at the office who died.

Rey, who hid under a table during the carnage, said the gunmen called out some of their victims’ names.

According to Paris prosecutor Francois Molins, 11 more people were injured, of whom four remain in critical condition.

“All the victims were on the ground or sitting and those seriously injured were trying their best to breathe,” emergency worker Patrick Hertgen said. “Many had been executed. Most had wounds to the head or torso.”

After fleeing into the street, the gunmen exchanged fire with officers in the first police car to respond to emergency calls and with two policemen on mountain bikes before firing repeatedly at a second patrol car.

“What was striking was the closely-grouped bullet holes in the windshield, which shows they (the gunmen) were in control of their weapons and of their emotions,” Rene-Georges Querry, former head of a police anti-terror unit, told BFM TV.

Amateur video filmed from a nearby rooftop showed a gunman walking up to a wounded policeman, who had staggered from the car to a nearby sidewalk, and shooting him dead point-blank.

The gunmen drove off toward northeastern Paris. They collided with a motorist before abandoning their car on a busy square and hijacking another vehicle as they escaped into the northern suburbs.

Although only two gunmen were visible on the videos at the crime scene, the motorist said there were three attackers.

Authorities have put the country on a “scarlet” terror alert, which means that an attack is imminent.

While the gunmen’s faces remained concealed throughout the attack, police recovered numerous shell casings at the scene as well as a glove that could yield DNA forensic evidence helping to identify the wearer.