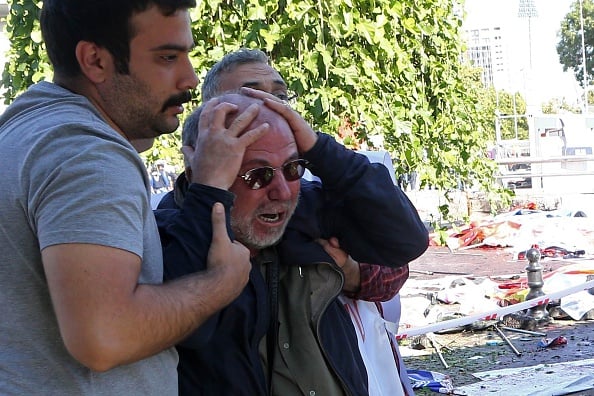 At least 95 people were killed when two suspected suicide bombers struck a rally of pro-Kurdish and labour activists outside Ankara’s main train station just weeks before elections, in the worst attack of its kind on Turkish soil.

Bodies covered by flags and banners, including those of the pro-Kurdish opposition Peoples’ Democratic Party (HDP), lay scattered on the road among bloodstains and body parts. The HDP blamed the government which, it said, had blood on its hands.

Footage screened by broadcaster CNN Turk showed a line of young men and women holding hands and dancing, and then flinching as a large explosion flashed behind them, engulfing people carrying HDP and leftist party banners.

“Like other terror attacks, the one at the Ankara train station targets our unity, togetherness, brotherhood and future,” said President Tayyip Erdogan, who has vowed to crush a Kurdish militant insurgency since the collapse of a ceasefire and resumption of intense violence in July.

As well as the 95 dead, 246 wounded people were still being treated, 48 of them in intensive care, the prime minister’s office said.

Witnesses said the two explosions happened seconds apart shortly after 10 a.m. as crowds, including HDP activists, leftists, labour unions and other civic groups, gathered for a planned march to protest over the deaths of hundreds since conflict resumed between security forces and the Kurdistan Workers Party (PKK) in the mainly Kurdish southeast.

“I heard one big explosion first and tried to cover myself as the windows broke. Right away there was the second one,” said Serdar, 37, who was working at a newspaper stand in the train station. “There was shouting and crying and I stayed under the newspapers for a while. I could smell burnt flesh.”

There were no claims of responsibility for the attack, which comes as external threats mount for NATO member Turkey with increased fighting across its border with Syria and incursions by Russian warplanes on its air space over the last week.

But Prime Minister Ahmet Davutoglu, exposing a mosaic of domestic political perils, said Islamic State, Kurdish or far-leftist militants could have carried out the bombing. He said there were strong signs two suicide bombers were responsible.

HDP leader Selahattin Demirtas blamed the government in blunt terms. He said the attack was part of the same campaign as the bombing of an HDP rally in the southeastern city of Diyarbakir on the eve of June elections and a suicide bombing blamed on Islamic State in Suruc near the Syrian border in July, which killed 33 mostly young pro-Kurdish activists.

“The government’s right and chance to hum and haw has long expired. You are murderers. Your hand is bloody. Blood has splattered from your face, your mouth to your nails and all over you. You are the biggest supporters of terror,” he told reporters in comments broadcast on the internet.

The HDP argues that Erdogan seeks to undermine its support and increase backing for his AK Party in elections due on Nov. 1 by associating it with PKK violence and factional infighting, a link the party denies strongly.

Sources in Erdogan’s office said U.S. President Barack Obama called the president on Saturday evening to convey his condolences, condemn the attack and stress that Washington would continue to stand beside Turkey in its fight against terror.

Davutoglu accused Demirtas, whose party garnered support from largely left-leaning voters beyond its Kurdish base to enter parliament in June, of “open provocation”.

Some activists saw the hand of the state in all three attacks on Kurdish interests, accusing Erdogan and the AK Party he founded of seeking to stir up nationalist sentiment, a charge Turkey’s leaders have vehemently rejected.

Labour unions which helped organise the rally hit by the bombs called a two-day strike for October 12-13, although such calls have not always been widely followed in the past.

The scale of casualties exceeded attacks in 2003, when two synagogues, the Istanbul HSBC Bank headquarters and the British consulate were hit with a total loss of 62 lives. Authorities said those incidents bore the hallmarks of al Qaeda.

Turkey has been on alert since starting a “synchronized war on terror” in July, including air strikes against Islamic State fighters in Syria and PKK bases in northern Iraq. It has rounded up hundreds of suspected Kurdish and Islamist militants at home.

Hours after the bombing, the PKK as widely expected beforehand ordered its fighters to halt operations in Turkey unless they faced attack. It said it would avoid acts that could hinder a “fair and just election” on Nov. 1.

Renewed conflict in the southeast had raised questions over how Turkey can hold a credible election in violence-hit areas but the government has so far said the vote will go ahead.

Davutoglu invited the leaders of the main opposition CHP and nationalist MHP to a meeting on Sunday to discuss the events, his office said. Nationalist leader Devlet Bahceli declined.

Turkey’s problems have been compounded over the last week by Russia’s launching of air strikes in neighbouring Syria that could further swell a refugee population of over two million on Turkish soil. Turkey has protested to Moscow over incursions into its air space by Russian warplanes.

“This brutal terrorist attack on peaceful demonstrators is also an assault on the democratic process in Turkey which I vehemently condemn,” German Foreign Minister Frank-Walter Steinmeier said.

The attacks come three weeks ahead of an election at which the AKP is trying to claw back its majority. In June polls, the party lost the overall majority it had held since 2002, partly because of the electoral success of the HDP, which Erdogan accuses of links to the PKK. The HDP denies the charge and says it seeks improved Kurdish minority rights by democratic means.

Designated a terrorist group by Turkey, the United States and the European Union, the PKK launched a separatist insurgency in 1984 in which more than 40,000 people have been killed.

It has since reduced its demands to greater rights for the Kurdish minority; but Ankara fears a link-up between Kurdish militants in Turkey and Kurdish groups in Iraq and Syria that could lead to demands for a separate Kurdish state.

The state launched peace talks with the PKK’s jailed leader Abdullah Ocalan in 2012 and the latest in a series of ceasefires had been holding until the violence flared again in July.