If you need any proof of just how wildly popular the dual-screen Asus Duo have become, you need only turn to the statement the company released at CES 2021 when it revealed that one in five ZenBooks sold in 2020 was a Duo.

Notching up the interest in its Duo collection, the brand has just launched its ZenBook Pro Duo 15 OLED  (UX582). At only 2.4 kg, it is also 21.5 mm slim. It’s an improvement over its UX581 predecessor released two years ago, with the latest entrant 100 g lighter and 2.5 mm slimmer than the UX581.

Display and the dual screen

With a chassis and lid made from magnesium alloy, you’ll likely find this to be an aesthetically appealing notebook. But the real star performer here are those dual displays.

The new ZenBook Pro Duo 15 OLED has a 15.6-inch screen with a 93 per cent screen-to-body ratio allowing for an immersive and distraction-free viewing experience.

But taking that viewing pleasure up several notches is the 4K UHD OLED NanoEdge touchscreen, with a wide 178° viewing angle, that supports 3840 x 2160 resolution with a 1,000,000:1 contrast ratio for sharp images and 0.2 ms response time. Asus adds that the OLED touchscreen colour volume is up to 1.6 times greater than a traditional LCD.

The secondary touchscreen system on this device is called the Asus ScreenPad Plus. Thanks to an ErgoLift design on the Duo, the keyboard automatically tilts when the laptop is opened. In this new notebook, Asus has introduced a new ErgoLift AAS plus (Active Aerodynamic System) hinge design to allow greater airflow between the main and secondary display.

Apart from the dual screens, it’s worth noting that the ZenBook Pro Duo 15 OLED  also features the NumberPad 2.0, an LED-illuminated numeric keypad integrated within the touchpad. 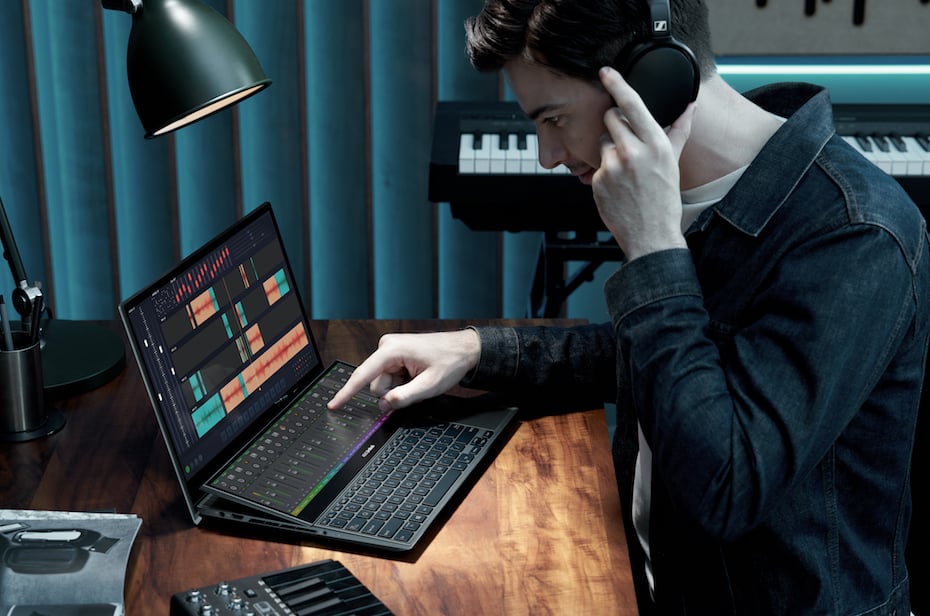 But beyond aesthetics, there is some serious computing power within the device. It is fitted with a 10th-gen Intel Core i9 10980HK processor and an NVIDIA GeForce RTX 3070 graphics package. Asus has confirmed that there are eight computing cores and up to 16 threads, as well as 5.3 GHz boost frequency and 16 MB caches for enhanced multitasking performance.

You don’t have to be a tech geek to fully comprehend that a combination of those specs allows for high-speed computing which can support the use of this notebook for professional power-intensive operations such as those used for video production and content creation, or for high-speed and low-latency recreational pursuits such as gaming. It also boasts 32 GB of memory and 1 TB PCIe 3.0 NVMeTM SSD (the latter of which is similar to that found in the ZenBook 13 OLED released earlier this year too).

Connectivity to the notebook two ThunderboltTM3, a full-size HDMI 2.1 port, and a Type-A USB 3.2 Gen 1 as well as a 3.5 mm audio jack. Each of the Thunderbolt port can support up to 40 Gbps data bandwidth and up to 8K display output.

Boasting of a WiFi 6 with speeds of up to 2.4 Gbps that have a 3X-higher throughput and 4X the network capacity of WiFi 5, it also features Asus’ proprietary WiFi SmartConnect.

With work-from-anywhere becoming the norm rather than the exception, video conferencing has become a major focus area in addition to downright computing essentials. Good thing then that the new Pro Duo 15 OLED has a reworked IR web camera algorithm that provides sharper image quality and more accurate white balance and colour saturation. An Asus AI Noise-Canceling Audio technology allows users to hear and be heard at the other end more clearly while cutting out ambient and background sounds. The AI-backed ClearVoice Speaker function recognizes human voices and filters out all ambient noises too.

Apart from a built-in Alexa system, the audio system of the new Pro Duo 15 OLED has been tuned by experts from the Asus Golden Ear team and certified by audio specialists Harman Kardon too. When certified by a bonafide audio major such as Kardon, means that the new notebook’s audio quality is comfortably above the industry average standard.

Keeping the show (and the notebook) charged is a 92 Wh lithium-polymer battery. It goes without saying, a battery is a make-or-break factor when deciding whether to purchase a device. Asus says that with the UX582, its battery capacity is rated at 6.2 hours on a single charge, up 22 per cent over the ZenBook Pro Duo UX581.

An ultra-high-resolution sharp dual-display, fiery computing power and plenty of connectivity and entertainment options mean this  ZenBook Pro Duo 15 OLED owing to which Asus could come up with dramatically different stats come CES 2022.