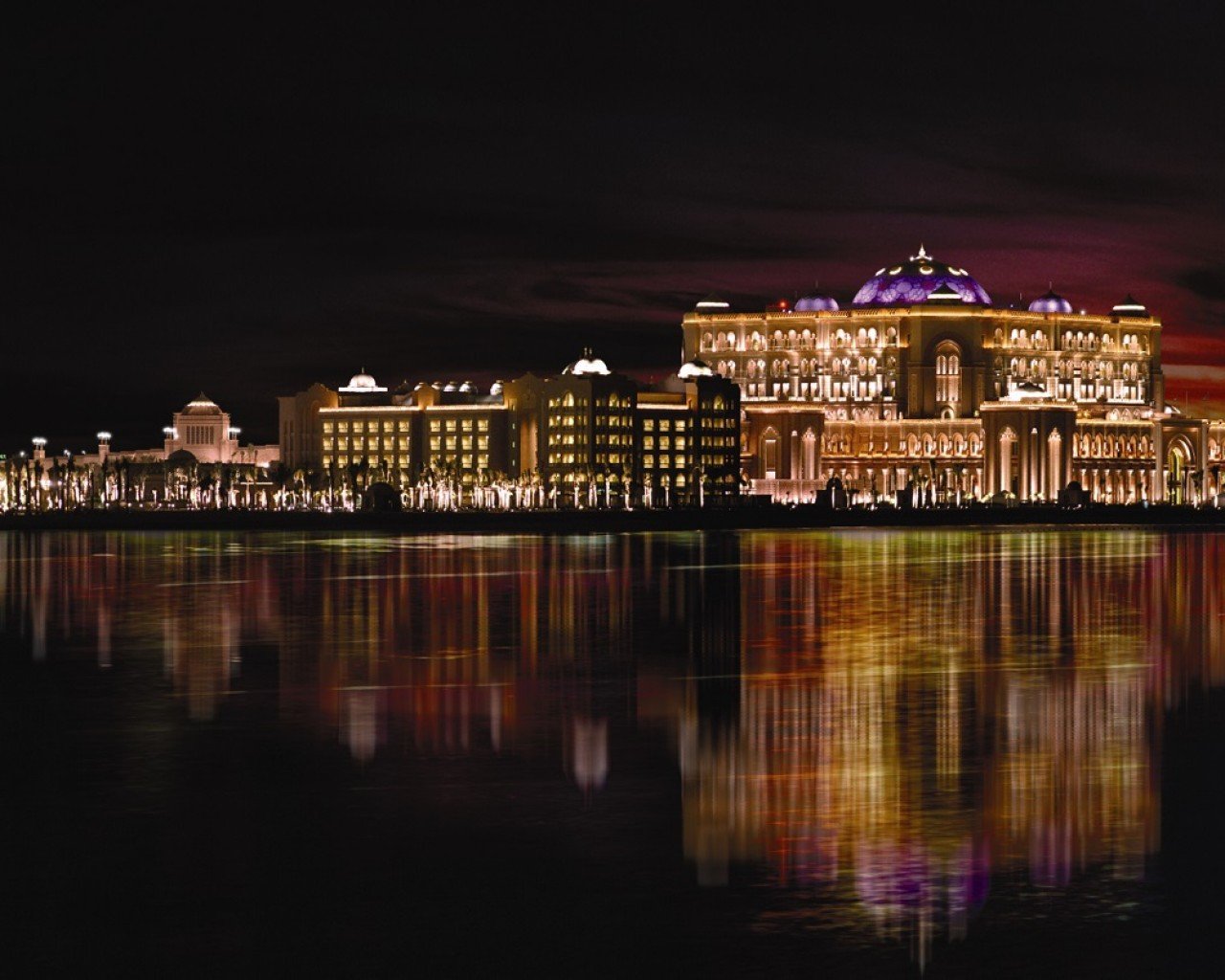 Large, lavish and opulent. These are some of the words that best describe Abu Dhabi’s iconic Emirates Palace.

Built at a cost reportedly reaching $3bn, the hotel opened in 2005 with amandate to become the pinnacle of luxury hospitality in the United Arab Emirates capital. It has succeeded in doing just that and more as one of the few hotels in the world that draws tourists as an attraction in its own right.

As you make your way into the property’s lavish grounds, it is clear that no expense was spared in its construction. Its high fences and extensive greenery provide a feeling of exclusive luxury that continues as you make your way up to the main entrance.

Inside you could be forgiven for thinking you had stumbled into the residence of the Abu Dhabi royal family. More than a dozen types of marble were used in the palace’s construction and 114 domes stand atop its buildings. Not to mention the 1,000 chandeliers made with Swarovski’s premier Strauss crystals. The Grand Atrium dome in particular, with its surface finish of silver and gold coloured glass mosaic tiles, is a treat for the eyes and a fitting introduction to the facilities on offer.

To say Emirates Palace is large would be an understatement. Its facilities stretch across a plot of one million square metres including 1.3km of beautiful private beach. It is easily possible to go for a morning jog without even leaving the hotel, taking in the Arabic influenced palace scenery as you go.

Indeed, one of the only ways to capture the sheer scale of the property against the Abu Dhabi skyline is via a ride on one of the many free bikes – to the end of the marina. Then when it comes to a well-deserved rest you can park yourself at the sun loungers on the beach or at one of the two large pool areas (one for children and one for adults) to soak in your surroundings.

But perhaps what makes the property stand out from the crowd most is its service. From the dates and tea offered during the seamless check-in process to the guided walk to your room that follows, the palace staff certainly make you feel like royalty. And this continues in your interactions across the property where every face greets you with a smile.

When it comes to eating or drinking too, expect to be impressed by the service at more than a dozen outlets on site.

You can enjoy the elaborate breakfast buffet at Le Vendome to the sound of bird song on the balcony, stop for a luxury shawarma or burger during your pool adventures at Las Brisas and then enjoy delicious meat and seafood dishes to the sound of the waves in the private beach huts at BBQ Al Qasr for dinner.

Then if you want to try something different the next day, you can dine in entirely different venues. Or just sit back and enjoy room service in one of the spacious suites with their sprawling balcony areas, huge televisions and luxury bathrooms.

It is easy to see why Emirates Palace is the hospitality option of choice for world leaders and royals when they visit the capital.

First let’s talk history. When was the idea for Emirates Palace first conceived and what was the process to making it a reality?

“Taking root from Sheikh Zayed’s vision to create a ‘people’s palace’ and owned by the government of Abu Dhabi, Emirates Palace was built to host global leaders, business travellers and holidaymakers from around the world. “It was designed and constructed to the highest possible standards of luxury and has the distinction of being one of the most expensive buildings ever constructed. This feat of creating an Arabian fantasy was made possible through the collaborative efforts with experts like Wimberly, Allison, Tong & Goo as the project architect; Arabian Construction, Belhasa Construction and Actor Electromech who defined the lighting concept; KY&A for the interior design; and Kempinski Hotels for our operational expertise.”

Emirates Palace is widely considered the place to stay for luxury travellers in Abu Dhabi. How has it developed this reputation and how do you plan to maintain such high standards?

“Emirates Palace is a stunning landmark and is considered part and parcel of the Abu Dhabi experience. By working closely with our partners at Abu Dhabi Tourism and Culture Authority and Etihad Airlines, we have been able to maintain this positioning and exposure.

“Despite the influx of luxury hotels over recent years, we remain very competitive. This is because we offer a destination within a destination that remains appealing to our diverse clientele and this helps us keep a competitive edge.

“We will continue to build on the successes of previous years and look to the future with new and exciting projects designed to ensure that guests continue to experience the ultimate in service quality, exclusivity and breath-taking surroundings that have become synonymous with the name Emirates Palace.”

What is the hotel’s average occupancy rate across the year?

“As a landmark hotel consistently offering bespoke services to our international and local guests, our average hotel occupancy stays above par, as compared to other luxury hotels within the region.

“Emirates Palace enjoyed ground breaking twelve month results in 2014, surpassing its previous record year of 2008. The outlook for 2015 looks promising as the current recorded occupancy rate is above 60 per cent.”

How much does the hotel depend upon the Abu Dhabi Formula One Grand Prix for business and does the atmosphere change during the event?

“Located along the landmark Corniche, the hotel is in close proximity to Yas Marina Circuit where the races take place and is part of the signature experience for many of the tourists that visit during this period.

“With a capacity of approximately 60,000 people, with fans from all over the world, we get in the spirit with a lineup of Formula One inspired amenities and spa deals like our Formula 1 Spa Fix with ‘pit stop’ treatment options.”

The hotel markets itself on ‘going beyond five-star luxury’ similarly to Dubai’s Burj Al Arab’s ‘seven-star’ claims. Is there some healthy competition between the two properties, as there is between the two emirates themselves?

“Even though some guests have kindheartedly labeled our service as ‘seven star’, based on their experiences, we officially classify ourselves as a five-star luxury property since this is the highest category attainable. The place is a landmark property and a destination in its own right. Many tourists make an effort to visit the palace even if they are staying elsewhere.

“We are very proud to be recognised in this respect. The success we have achieved in marketing Abu Dhabi and the United Arab Emirates has been a concerted effort. We remain committed to working with and supporting the efforts of all relevant industry players to further enhance our appeal as a preferred destination for business and leisure tourists alike.”

The property is described as the second most expensive hotel ever built, behindonly Marina Bay Sands in Singapore. Was it designed to recoup its construction costs or is its iconic worth considered to be about more than just money?

“Sheikh Zayed’s vision was to create a ‘people’s palace’ and a national landmarkthat is representative of the very best in the UAE and the wider region. Catering to the needs of both leisure and business guests, the hotel was designed to offer accommodation, a plethora of dining, recreational, conference and event space options – regardless of the expense involved.

“It continues to be reputed for this versatility, even 10 years after it first opened its doors and I think that this was the main objective.”

What is the national make-up of your hotel guests?

“Our top markets are Germany, the United Kingdom, Russia, China and the Gulf Cooperation Council countries. We attract families on their annual holiday, business guests visiting for conferences and meetings, government delegations on official business and royal guests.

“We continue to expand our spectrum to include markets like Australia, India and Brazil. We work closely with the ADTCA and Etihad Airways to promote Abu Dhabi as a tourist destination, and so our feeder markets largely mirror the countries where ADTCA has a presence and where Etihad operates flights.”

Has this changed in line with geopolitical issues. Are there now less Russians in your property because of the falling rouble and less Europeans because of the strength of the dollar-linked dirham, for example?

“We have noticed a decrease in the number of visitors from Russia and for some other European countries. However, the contributing reasons go beyond currency differences. The current political climate has had an impact as well. That said Abu Dhabi and the UAE in general remain an attractive destination for the year-round sunshine, leisure options and authentic cultural experiences available. For these feeder markets, these continue to be the main motivations. Also, this decrease is countered by other European countries where we have seen significant growth.”

How has technology impacted this and your other properties in the region, do you see guests checking in online and walking past reception to open their room with a smart watch soon becoming the norm?

“Technology is something one cannot avoid or ignore in today’s world. We have seen a 15 per cent increase in online bookings when compared to 2014.

“We offer guests a seamless online and offline experience, without taking away from our promise of luxury service.”

How important are the food and beverage options for the success of a hotel and what do you think sets Emirates Palace apart from other venues in this regard?

“Emirates Palace is recognised as a food and beverage destination. We are renowned for quality, creativity and dedication to being the best in whatever we do. A variety of 14 award winning restaurants, cafés, lounges and bars highlight cuisine from around the world and feature gourmet experiences curated by our team of talented chefs. They use the very best products, sourced for their quality and provenance.

“In 2016, we have plans to push ourselves to new culinary heights. We look forward to an exciting year ahead.”

Are there any expansion plans on the hotel grounds or could we see another Emirates Palace property appearing somewhere else in the UAE?

“We are continuously upgrading and improving our facilities to maintain our high standards. In 2014, we renovated Emirates Palace Spa and in October 2015 upgraded our alfresco beachside restaurant, BBQ Al Qasr, with new kitchens and a revamped lounge area. We are also in the process of planning special projects for next year and beyond, which we are very excited about and will expand upon at the appropriate time.”