To have your finger on the pulse of the region’s underlying travel and tourism sentiment, all you needed to do was visit the Dubai World Trade Centre between May 9-12. The Arabian Travel Market (ATM) had a palpable buzz that ran through the length of the show floor across its approximately 1,500 exhibitors.

After all, it was the first full-fl edged show since the start of the pandemic, following a muted scale of an event last year. This year was when ATM made a comeback that counted – and it was a feeling that resonated pervasively through the 30,000 participants and 23,000 visitors. It was only logical for nearly every major airline, hotel brand and tourism board either operating in the region, or seeking to make in-roads within it – or those attempting to woo travellers from it – to be present at the 29th edition of ATM. Data shared by Colliers International meanwhile forecasted that $4.5bn worth of hotel construction contracts will be awarded in the GCC during 2022.

According to research from STR, commissioned by ATM 2022, it showed that as of March this year there were a total of 32,621 hotel rooms under construction in Saudi Arabia alone.

A strong presence
From a sprawling Saudi Tourism pavilion which highlighted developments from its giga projects, not least Diriyah Gate, The Red Sea Project and Amaala, the impressive setup was only a few metres from the three-storey Saudia stand with a staircase that extended the breadth of the pavilion. 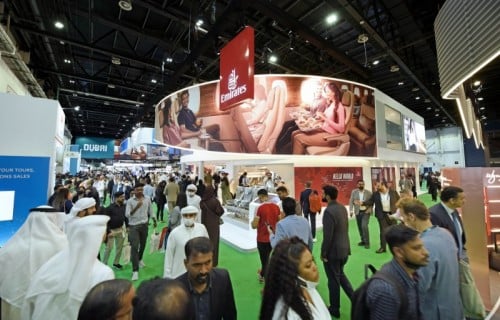 One of the big announcements by Saudi Arabia’s flag carrier at the ATM was the launch of its all-new rebranded Saudia Business B2B division that customises travel solutions for corporate, agency and MICE clients. Metres away from the Saudia pavilion was none other than Dubai’s Emirates, who used the ATM to showcase the full range of its new premium economy class which will initially be rolled out on aircraft servicing the London, Paris and Sydney routes starting this August.

Projects in the spotlight
From within the UAE, there were major showings by the individual emirates from Sharjah and Ras Al Khaimah (there wasn’t an announcement as big as the Dhs500m sustainable development plan it announced at last year’s ATM – although there was much discussion about the recently announced Wynn Resorts project). Abu Dhabi’s presence at the ATM meanwhile was an opportunity for it to shed light on the Department of Culture and Tourism – Abu Dhabi’s (DCT Abu Dhabi) move to appoint Miral to oversee Saadiyat Island’s destination management strategy.

Saadiyat Island expects to attract 19 million visitors and contribute Dhs4.2bn in direct tourism revenue by 2025. Managing destination experiences is an area tourism boards are increasingly investing resources into. The role of in-destination experiences was discussed during the opening session of [email protected] forum.

“We surveyed travellers about what matters most to them when they are travelling and they prioritised attractions, activities and tours above other factors. Experiences are not just the ‘things to do’ – they are the reasons to go, representing a significant opportunity for the travel and tourism industry,” said Douglas Quinby, co-founder and CEO of Arival. 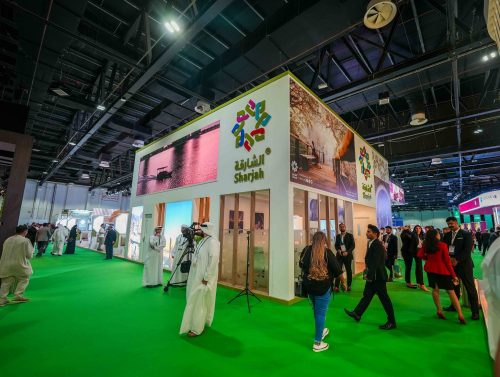 In 2019, global gross industry sales of travel experiences reached $254bn. It was the third-largest sector in travel and tourism, after transportation and accommodation, with almost a million operators worldwide. It’s reason enough for the likes of Qatar Tourism to announce that it will launch a new Qatar Specialist learning programme soon for global trade travel partners to familiarise them with the country’s offering – a similar programme was launched by the Saudi Arabia’s Royal Commission for AlUla, called the AlUla Specialist programme, at the ATM this year too.

International exhibitors
Across the corridor from the aviation stands at the ATM, several international tourism boards were present – they were there to make sure their destinations were top-of-mind for high-spending and well-travelled GCC tourists. Tourism Malaysia said that in
2019, the country received 397,726 tourists from the MENA region. Saudi Arabia was Malaysia’s top source market, accounting for 121,444 tourists.

The magnitude of the GCC as a powerful contributor to global tourism was only reinforced by Yamina Sofo, director of sales and marketing at the German Tourism National Office, who says, “The GCC is now the second-most important incoming market for tourism for Germany, just behind the US. The GCC market came back very fast last year and we ended 2021 with plus 83 per cent compared to 2020. We’ve already seen that in the fi rst two months of Janu-ary and February this year, we’re plus 200 per cent compared to the same two months last year.

“The GCC customer has a high purchasing power. GCC guests on average spend Eur4,750 per person per trip, which is much higher than the Eur2,500 spent on average by other overseas guests. The GCC guest stays longer too – an average of 12 nights per visit. Pre pandemic, in 2018-2019, we had 1.6-1.8 million overnight stays from GCC guests in Germany – and by GCC guests, we are only referring to GCC nationals.”

Other major tourism boards including Qatar tourism participated with over 35 partners at the pavilion, whereas those such as Jamaica Tourism Board made its show debut at the ATM and lever-aged opportunities including one wherein Edmund Bartlett, Minister of Tourism for Jamaica, met with Sheikh Ahmed bin Saeed Al Maktoum, chairman and chief executive,Emirates Airline and Group, at the ATM to discuss possible collaborations.

Hospitality representation
With regards to accommodation, hotel companies and individual brands were also represented extensively at the ATM. IHG Hotels & Resorts – which has a port-folio of 6,000 hotels in over 100 countries across brands including InterContinental, Voco, Six Senses and Holiday Inn – took the opportunity at ATM to showcase its newly released IHG One Rewards loyalty pro-gramme. Rotana meanwhile announced the launch of the Edge by Rotana brand that allows hotel owners to maintain their unique styles and offerings, bypass-ing traditional management transitions, while linking up to Rotana’s management and commercial systems.

Radisson Hotel Group meanwhile outlined their upcoming Radisson Resort Palm Jumeirah property in Dubai, and also its plans for the Saudi market where it operates 24 properties at the moment, with another 20 under development in the kingdom.

Shortly before the ATM began, another of the show’s prominent participants, the UAE-based hospitality company Time Hotels, said that it plans to increase its portfolio by 40 per cent to 21 properties across the UAE, Saudi Arabia, Egypt and Sudan by 2023. Other UAE homegrown brands including Emaar Hospitality Group and Jumeirah Group too were present and outlined plans for growth across the region. Some of the key trends that were repeated by many of the hotels and other stakeholders was the rise of the “Bleisure” – business plus leisure.

The trend is evident by moves such as the Ajman Free Zone signing four MoUs with the Fairmont Hotel Ajman, Bahi Ajman Palace Hotel, Zoya Health & Wellbeing Resort Ajman, as well as Altayar Travel & Tourism at the ATM 2022, in effect recognising that business and leisure travellers are indeed not mutually exclusive categories. If the ATM proved that the industry as a whole was on a path of high growth, it was figures released by Dr Ahmad Belhoul Al Falasi, UAE Minister of State for Entrepreneurship and SMEs and Chairman of the UAE Tourism Council, a few days later, that showed the strong foundation upon which that growth was being delivered.

In Q1 2022, the UAE’s hotel establishments attracted nearly six million visitors who spent 25 million hotel nights, a growth of 10 per cent over Q1 2019. Hotels also generated a total revenue of Dhs11bn over the first quarter of this year, a 20 per cent growth compared to the corresponding period in 2019. When pre-pandemic bench-marks are brought into play, it’s perhaps time to start believing that the recovery is permanent.