Arab university students may be as knowledgeable as eighth grade pupils in Singapore aged 14-15, an academic has suggested.

On stage at the Knowledge Summit in Dubai, Youssef Sadik, a professor at Morocco’s Mohammed V University, referenced the results of the 2015 Programme for International Student Assessment study.

The Organisation for Economic Cooperation and Development (OECD) report, released this week, showed that students from top ranking country Singapore were two years of study ahead of their peers in Sweden and the US, he said.

“In our Arab countries I can imagine an 8th grade Singapore student is as knowledgeable and skilled as a university student in the Arab world and this should bring us to focus on the inputs of this data,” Sadik argued.

“These students joining the higher education system, their skills are a lot less than elsewhere in the world.”

The PISA study measured 540,000 15-year-old students in 72 countries, including 15,000 from the UAE, for science, reading, maths and collaborative problem solving.

In the ranking the UAE moved up a place compared to the previous study in 2012 to 47th in Mathematics but fell two places in science and reading to 46th and 48th respectively.

The country’s mean scores for each of three subjects also decreased and stood below the OECD average.

Sadik was speaking at a session discussing updates to the 2016 Arab Knowledge Index, which is developed by the Mohammed Bin Rashid Al Maktoum Foundation.

Scores on the Higher Education Index varied from 8.39 for Somalia at the bottom to 61.44 for the UAE at the top. 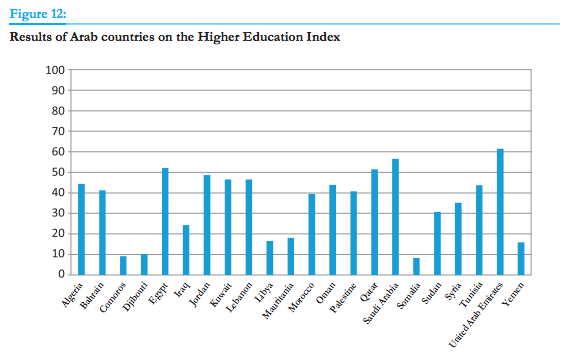 But it was noted that none of the Arab countries scored more than 65.

“Irrespective of the disparity in scores, all countries in the Arab region, including those with top rankings need to do more to develop their educational systems in order to draw level with the average quality of systems around the world,” the report noted.