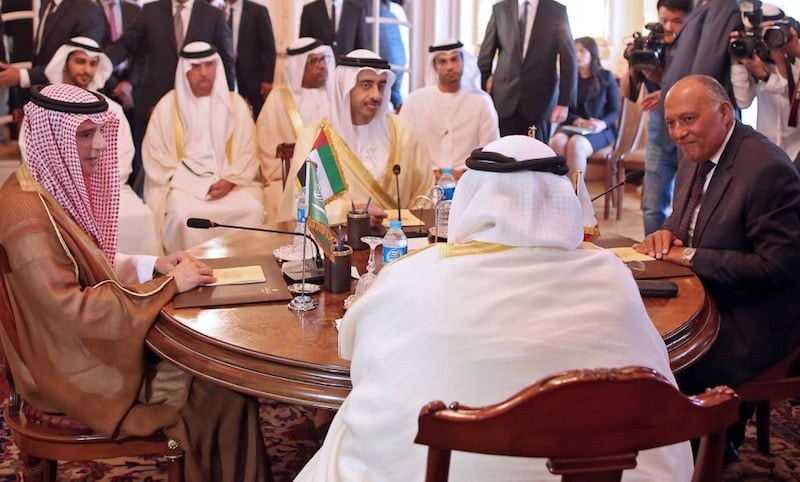 Four Arab states refrained on Wednesday from slapping further sanctions on Qatar but voiced disappointment at its “negative” response to their demands and said their boycott of the tiny Gulf nation would continue.

Qatar earlier in the day accused Saudi Arabia, the UAE, Bahrain, and Egypt of “clear aggression” and said the accusations cited when they severed ties a month ago “were clearly designed to create anti-Qatar sentiment in the West”.

The four Arab nations accuse Qatar of supporting terrorism and allying with regional foe Iran, which Doha denies. Their foreign ministers met in Cairo on Wednesday after a deadline they gave Qatar to meet 13 demands expired.

They had been expected to consider further sanctions at the gathering, but announced no new measures.

“The response the four states got was overall negative and lacked any content. We find it did not provide a basis for Qatar to retreat from its policies,” Egyptian Foreign Minister Sameh Shoukry said, reading out a joint statement after the meeting.

“The political and economic boycott will continue until Qatar changes its policies for the better,” Saudi Foreign Minister Adel al-Jubeir told a news conference.

Qatar’s response to the demands has not been made public.

The UAE’s minister of state for foreign affairs, Anwar Gargash, said in a tweet that Qatar faced “greater isolation, incremental measures and reputational damage” if it did not heed the demands.

“For any real discussion with Doha to gain traction, it has to be responsible for past actions and recognise the necessity of changing course. The message from Cairo is zero tolerance for terrorism, (a) powerful message from Arab world to international community. Qatar can’t miss the bus,” Gargash said.

Shoukry later told an Egyptian privately-owned broadcaster that the demands were non-negotiable.

“The matter from the beginning was not up for negotiations … there is no middle ground,” he told the On television channel.

The foreign ministers said they would meet again soon in the Bahraini capital, Manama, but gave no date. Intelligence chiefs from the four countries also met in Cairo on Tuesday night, officials said.

The worst inter-Arab rift for many years has aroused deep disquiet among Western allies who regard the region’s ruling dynasties as essential partners in energy and defence.

The Arab countries have demanded Qatar curtail its support for the Muslim Brotherhood, shut down the pan-Arab al Jazeera satellite TV channel, close a Turkish military base and downgrade its relations with rival Iran.

Turkey, the biggest regional power to stand by Qatar, has sent to Doha 100 cargo planes with supplies since its neighbours cut air and sea links. It has also rushed through legislation to send more troops to its base in Doha.

Two contingents of Turkish troops with columns of armoured vehicles have arrived since the crisis erupted on June 5.

Turkish President Tayyip Erdogan on Wednesday dismissed calls for closure of the base and said the list of Arab demands amounted to an unlawful intervention against Qatari sovereignty.

Qatar along with Turkey backed a Muslim Brotherhood government in Egypt before it was overthrown in 2013. The Arab states have demanded Qatar sever any links to the Brotherhood and other groups they deem to be terrorist, ideological or sectarian.

“The visions of the two presidents on dealing with current regional crises were in line, especially when it comes to reaching political settlements which contribute to regional security and stability,” Sisi’s office said in a statement.

Trump has voiced concern to both sides. Qatar, a small peninsular country protruding into the Gulf, hosts the biggest U.S. military base in the region as a bulwark against Iran.

Shoukry said Trump’s call had not affected the statement coming from the foreign ministers.

The Qatari foreign minister, Sheikh Mohammed bin Abdulrahman al-Thani, told a session of London’s Chatham House think-tank that Doha was continuing to call for dialogue to settle the dispute.

He said that this was “despite the separation of 12,000 families, despite the siege that is a clear aggression and an insult to all international treaties, bodies and jurisdictions.”

He suggested Qatar, the world’s biggest supplier of liquefied natural gas (LNG) and second largest gas exporter after Russia, was preparing for a more protracted rift.

“What we’ve done in the last few weeks is develop different alternative for ways to ensure the supply chain for the country not to be cut off.”

Qatar announced on Tuesday that it planned to raise LNG production capacity by 30 per cent in the next five years.

Company and industry sources told Reuters that the West’s three biggest energy firms are lobbying Qatar to take part in a huge expansion of its gas output, handing Doha an unintended but timely boost in the dispute.

Qatar has invested heavily in infrastructure projects in Western countries and works closely with the United States and other allies on Syria’s civil war.

“Reading between the lines, the blockading countries (are) demanding that we have to surrender our sovereignty to end the siege, something which … Qatar will never do,” Sheikh Mohammed said.

Responding to the accusation that it has drawn too close to Iran, he said Doha had to live alongside Tehran since the two states shared an offshore gas field.

Gulf newspapers close to their governments appeared also to see little prospect of any immediate deal.

The editor of the Abu Dhabi government-linked al-Ittihad newspaper wrote that Qatar, with a population of two million compared to Saudi Arabia’s 31 million, was “walking alone in its dreams and illusions, far away from its Gulf Arab brothers”.

Qatari officials say the Gulf states’ demands are so stiff they suspect they were never seriously meant for negotiation.

German Foreign Minister Sigmar Gabriel, on a tour of Gulf countries, said he was cautiously optimistic the feuding states would reach a solution once they had talks.

“But it is also possible that it will continue to be difficult for some days,” he told reporters in Kuwait where he met with the Gulf state’s ruler who is mediating in the crisis.

Bahraini Foreign Minister Sheikh Khalid bin Ahmed al-Khalifa said any decision on ending Qatar’s membership of the Gulf Cooperation Council (GCC) would come from the GCC itself and that such a measure would be considered when it next met.