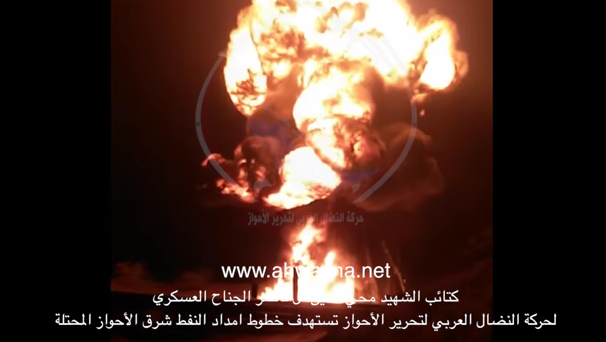 An Arab opposition group in Iran has claimed the destruction of two Iranian oil pipelines and vowed to carry out more attacks.

The Arab Struggle Movement for the Liberation of Ahwaz (ASMLA) said the attacks came in response to the Iranian regime’s announcement of 29 new oil and gas deals with foreign companies this week.

Video footage on the group’s website claiming to show the attack could not be verified.

The ASMLA group said the first attack tagetted a pipeline belonging to the Aghajari oil company, which transported 440,000 barrels of crude a day from the Maroun oilfield to Omidiyeh city.

The second attack was claimed to hit a pipeline transporting 60,000 bpd a day from the Baharkan oilfield between the port towns of Janabi and Deylam.

The commander of the ASMLA group was quoted as saying it had prepared “detailed and precise” plans to carry out a number of operations against Iran this year.

Ahwaz is the capital of the oil and gas industry in Khuzestan province, which is home to an indigenous Arab population.

It was subject to an annexation attempt by Iraq in 1980 resulting in the Iran-Iraq War.

In June this year, Iran said it had prevented “one of the biggest plots” by terror groups targeting the country during the holy month of Ramadan.