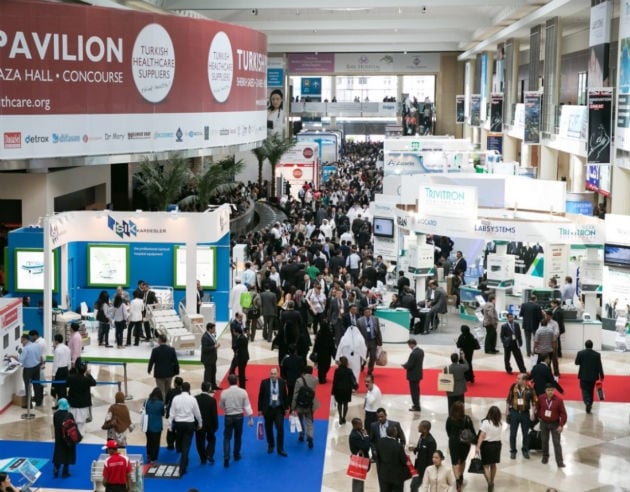 The demand for healthcare professionals and services is rising as the industry undergoes continuous expansion in the region. A total of 138,965 hospital beds, 140,334 physicians and 227,079 nurses will be required by 2050 to maintain current care levels across the whole GCC, said a 2013 Ithmar Capital report.

Arab Health 2014, one of the world’s largest healthcare tradeshows, comes at a time when the region is transforming itself into one of the lucrative healthcare markets globally.

With the World Trade Centre halls opening doors for exhibitors on January 27, Simon Page, managing director of Informa Life Science Exhibition and the event organiser, says that Arab Health is expecting around 85,000 visitors this year.

“In 2013, more than 81,000 visitors came from 153 countries, proving that Arab Health is truly where the healthcare world comes to do business,” he said.

The gulf’s healthcare market is brimming with numerous opportunities since many regional governments are investing heavily in welfare policies since the Arab Spring uprising in 2011. In addition, governments are evolving insurance laws in their respective countries.

Saudi Arabia, the most lucrative healthcare market in the GCC, has been ramping up its efforts to develop the sector. The country allocated Dhs106 billion of its 2014 budget for healthcare purposes, up eight per cent from its spend in 2013.

The region has also caught the eye of both domestic and private healthcare investors, according to a recent Ernst & Young report.

Page added that the UAE’s healthcare industry has been witnessing constant expansion since the financial crisis.

“Various factors such as government initiatives, investment in healthcare infrastructure, rising population, changing social demographics, increasing incidences of chronic and lifestyle diseases and the emergence of insurance-based services have added to the growth in the healthcare industry,” he said.

“The UAE is at the heart of the Middle East and is a tourism, trade and logistics hub. It also has a thriving healthcare industry.

“As the optimum geographical location right in the centre of trade and travel routes, this makes it the perfect venue for Arab Health.”

The UAE government’s support for the event is also proof of its remit to encourage more private-public partnerships into the country, Page said.

“The authorities increasingly view private public partnerships as welcome sources to induce efficiency and innovation in the healthcare sector,” he said.

As proof of increased investor interest in the region’s healthcare industry, the number of country pavilions at Arab Health 2014 has risen to 37, augmenting the range of hospital medical equipment, medical devices and medical technology on display.

The latest additions are from countries such as Iraq, Pakistan and Morocco.

The event will also feature a newly launched training village, which will consist of a designated area where top specialists from the healthcare sector will be offering hands-on training on the most sophisticated devices.

“There is the addition of even more space exclusive to MEDLAB which will accommodate an additional 100 new exhibitors, bringing together more than 440 exhibitors and a total of 12 country pavilions.”

The event is also a launch pad for a number of innovations and medical technologies in the region.

SuperCable, the world’s only iso-elastic polymer, cerclage cable system used in orthopaedic surgeries will be available for the first time in the MENA region during Arab Health.