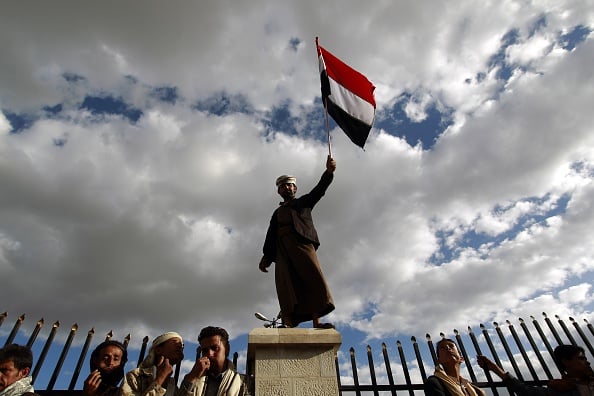 Gulf Arab coalition forces fighting Houthi militia in Yemen are advancing on the capital in a two-pronged offensive, generals told reporters on Monday at a desert oil compound they have turned into a military base.

Yemeni forces and their Arab allies are fighting to oust the Iranian-alled Houthis in a six-month war that has killed more than 4,500 people and brought the country to the brink of famine.

Shaddadi, commander of Yemen’s central military district, told a small group of journalists on a visit organised by coalition forces: “We are optimistic, but we don’t have faith in the Houthis, and we will triumph no matter what.”

He was speaking at a desert coalition base at Safer, an oil industry compound in Marib province about 150 km (95 miles) east of the capital Sanaa. Reporters saw scores of tan-coloured heavy armoured vehicles and tanks, and at least 20 black Apache helicopters.

A coalition led by Saudi Arabia began air strikes against the Houthis and their allies in late March after they pushed from their northern stronghold towards the southern port of Aden.

But the bulk of the 5,000-strong coalition ground forces are provided by the United Arab Emirates. UAE General Ali Seif al-Kaabi told reporters his country had 4,000 men in Yemen, and denied reports that Qatar and Egypt had forces on the ground.

Kaabi said the coalition “is making two lines to Sanaa”, its ultimate target after retaking Aden from the Houthis in July.

One line of advance was from Aden and the southwestern city of Taiz, while the other one would run from Marib to the northern province of Jawf and then to Sanaa.

Diplomats say it was the direct involvement of UAE ground forces, alongside Yemeni troops trained in Saudi Arabia and equipped with sophisticated heavy weapons, that allowed the coalition to break months of stalemate to capture Aden.

Kaabi suggested his men were driven in part by a need for payback after recent losses, including a Sept. 4 Houthi attack that killed 52 UAE soldiers, among other coalition troops.

“If you have lost a soldier, a friend, you won’t forget that. (Emirati soldiers) want to go to war, quickly to Marib, they want revenge,” he told reporters. But he also said the coalition was not seeking to fight Yemenis or occupy their country.

On Sunday five Saudi soldiers were killed near the border with Yemen, the Saudi Press Agency said, and the UAE news agency WAM said one Emirati serviceman was killed in the ground offensive in Marib.