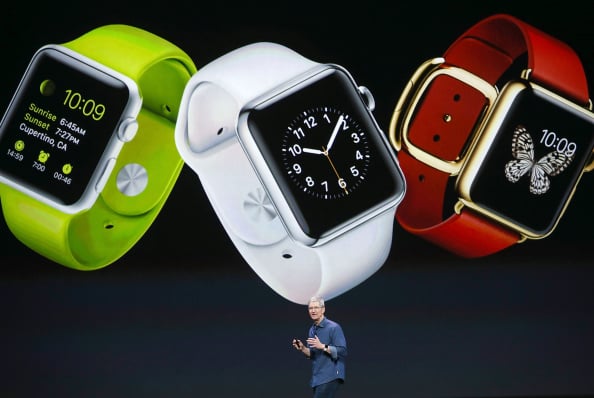 Apple’s rivals want to benefit from its magic, hoping that its long awaited new smartwatch will finally conjure demand for wearable technology that has so far generated more buzz about its potential than actual sales.

Gizmos that users wear on their bodies have yet to live up to the hype as the next big thing in technology. But experts say the arrival of Apple’s new Watch – expected to be launched at an event announced this week – could finally get consumers excited.

His company predicts Apple will sell 20 million of its new smart watches this year, helping spur 150 per cent growth in the wearable technology sector to 75 million gadgets, rising to 350 million by 2018. Strategy Analytics, a second research firm, estimates Apple is likely to sell 15 million watches this year.

Making novelty products is one thing. Getting people to wear them is entirely another. Just ask Nike or Google.

Sportswear maker Nike halted work on its line of sports fitness wristband products a year ago. By far the most high profile failure to date has been the futurist Google Glass, which the Internet giant quit producing in January.

The gangly glasses with a computer screen fascinated the world and drew legions of celebrities, fashion models and even Prince Charles to try on a pair, but the sometimes vertigo-inducing product prototype found few regular wearers.

Vendors must get over the “technology first” attitude and think in terms of specific benefits to consumers before they will buy anything so visible and intimate as wearables, according to a recent report by research firm Juniper Research.

“Consumers are still unsure about the use case for many wearable devices, including watches and glasses. In particular, consumers are hesitant to adopt wearable companion devices” that function much like smartphones, the report said.

Now, here comes Apple, with its track record of turbo-charging whole new categories, from music players to tablets, with products that win wide appeal. The company was as ever absent from the world’s largest annual gathering of the mobile industry this week, but it nonetheless stole the show by announcing a mysterious event next Monday, where it is widely expected to launch its much-anticipated but pricey new watch.

At the Mobile World Congress in Barcelona, dozens of electronics makers were seeking attention for their own watches, fitness trackers and other wearable electronics accessories.

To take their products into the mainstream, many manufacturers of smartwatches are focusing on style, trying to make them look less like futuristic gadgets with oversized rectangular screens, and more like classic watches.

This year saw several companies follow the lead of Motorola, now owned by China’s Lenovo, which won kudos last year by showing off a style-conscious device with a round screen. Both China’s Huawei and South Korea’s LG Electronics showed off round smartwatches this year.

“It looks like a real watch!” Huawei’s head of consumer business Richard Yu boasted of his company’s offering, which sports a choice of 40 round screen “faces”, including replicas of classical Swiss watches.

While makers of conventional watches have so far mostly resisted the move to smartwatches, there are signs that brands better known for style than technology are testing the market. American brand Guess launched what it described as the first fashion-branded smartwatch.

Nike may have postponed its entry, but its U.S. sportswear rival Under Armour stepped in, launching a co-branded fitness device with Taiwanese phone maker HTC.

Still, for now wearable smart devices mostly work by linking to a smartphone, and consumers do not seem to be lining up to buy a watch that acts mainly as an expensive remote control for a phone they have to carry in their pockets anyway.

Some experts say the technology will only really take off when the wearables can be used independently.

Forrester analyst Thomas Husson said “smartwatches will complement, not replace smartphones” for at least the next two to three years.